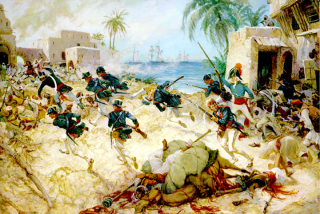 "The 2018 National Defense Strategy redirected the Marine Corps’ mission focus from countering violent extremists in the Middle East to great power/peer-level competition, with special emphasis on the Indo-Pacific. Such a profound shift in missions, from inland to littoral, and from non-state actor to peer competitor, necessarily requires substantial adjustments in how we organize, train, and equip our Corps. A return to our historic role in the maritime littoral will also demand greater integration with the Navy and a reaffirmation of that strategic partnership. As a consequence, we must transform our traditional models for organizing, training, and equipping the force to meet new desired ends, and do so in full partnership with the Navy." (Department of the Navy)

This is the lead paragraph of “Force Design 2030” laying out the USMC Commandant’s guidance for transforming the Corps from a land force competing with US Army missions to an integral part of the US Navy focused on littorial operations. It is a long overdue return to the Corps’ original mission and focus much like the Pacific island hopping campaign of World War II.

The majority of the articles dealing with this are focusing on the decision to jettison the three Abrams tank battalions. The Marines will also drop three infantry battalions and exchange most of its tube artillery for rocket artillery (perhaps MLRS) as well as a good chunk of its vertical lift capability and even some of its assault amphibian capabilities. They also plan to greatly increase the UAV capability and reduce the manpower of the remaining 21 active infantry battalions by 200. In conjunction with the Navy, the Marines are planning for smaller, lower signature and more affordable amphibious assault ships even mentioning an LST sized ship.

As important as these changes will be, the more important change is in how the Marines intend to fight. Rather than the standard two up, one back, high-diddle-diddle, straight up the middle approach, the Commandant says his Marines must be capable of distributed operations. I first read of these distributed operations about 25 years ago when the Marines conducted a field exercise with an infantry battalion operating as small independent units over a wide battlefield. The results of the exercise impressed USMC leadership. General Michael Hagee, then Marine Commandant, defined it thusly. “Distributed operations is the coordinated interdependent action by dispersed small units that are task organized for the mission, throughout the breadth and depth of the battlespace, ordered and connected within an operational design focused on a common aim,  and with increased access to functional support.”

Small units operating independently is not new. Companies, platoons and even squads operating independently is something widely practiced in the Army and probably in the Marines as well. The difference lies in a high degree of inter-coordination among these independent units along with a high degree of coordination with supporting fires. Every rifle squad must be capable of also functioning as scout-snipers and an ANGLICO team. In addition, Marines will have to know how to set up, operate and secure unsupported FAARPs and temporary MLRS firing points. That’s a lot to ask of a jarhead. SOF practice these things. Jarheads don’t. Nor do grunts. To this end, General David Berger, the current Commandant of Marines, calls for a complete revamping of current entry level and advanced infantry training programs to meet the demands of distributed operation. Although he doesn’t mention it, this doctrinal change will call for an equally far reaching revamping of Marine officer training.

These changes are a tall order. At least they won’t be wasting their time trying to compete to be another Army. They may end up being a much smaller Corps than envisioned in “Force Design 2030.” That’s not a bad thing if they become a littorial force capable of distributed operations.

BTW, the painting above is the "Attack on Derna" by Charles Waterhouse. It shows Lieutenant Presley O'Bannon and his Marines attacking Derna. What the Marines don't tell you is that the attack was led by US Army Captain William Eaton. Eaton was also the US Consul at Tunis. With little support and fewer resources, Eaton raised an army of Arab tribesman and Greek mercenaries. He attacked and took Derna with the help of Lieutenant O'Bannon's Marines. I like to think of Eaton as a forerunner of the Green Berets. DOL

This entry was posted in The Military Art, TTG. Bookmark the permalink.

36 Responses to Marine Corps returning to its roots – TTG