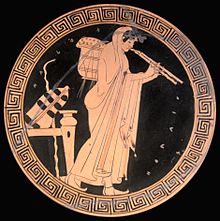 Note: Mimnermus was an elegiac poet from Colophon or Smyrna in Ionia active 630~600BC. Both Solon and Plutarch criticized his hedonism and selfindulgence. Plutarch specifically referred to Fragment 1 as "the utterances of intemperate people." The aulos player above is the type who would perform while Mimnermus recited an elegy.

What is life, what delight without golden Aphrodite?

May I die, when these can touch me no more,

secret love and soothing gifts and the bed,

such are the flowers of youth seized

by men and women: but when advances bitter

old age, turning a man both ugly and base,

foul worries grind him down incessantly,

and gazing at sunlight gives no delight,

but he’s hateful to boys, and repulsive to women;

such grievous old age god has made.

But we, as leaves grown by the flower-rich season

of spring, then suddenly rise from sunbeams,

have like them a bare span for the flowers of youth

we enjoy, knowing from the gods neither evil

nor good; but two black Death Spirits stand by us,

one holding the end of painful old age

and the other death; and brief is our youth’s

But when this end of youth passes us by,

to die at once is better than mere life

for many evils fill the heart: a man's homestead

is eaten away, and grievous poverty his;

another, longing for children whom he most

desires, descends the earth to Hades;

another has life-wasting disease; there's no man

to whom Zeus fails to give evil wealth.

At once an unspeakable sweat streams over my body,

and I’m shaken seeing the flower of comrades

But it remains time poor, just as a dream

is precious youth; for an excruciating and ugly

both hateful and dishonored; it makes a man unknown,

8 Responses to Mimnermus on love, pleasure, age and death