The nation's capital witnessed a massive and mostly peaceful protest today. During this mostly peaceful event tens of thousands of law abiding concerned citizens gathered to discuss their greviences, to air them before the press and government officials. The national leadership was all gathered in the city to attend to pressing matters of state. What better time for a rally and protest and a march for peace than when all our leaders are there to hear and see.

This event even garnered the support of many on the left side of the political spectrum, as we can see from this tweet from a prominent national leader: 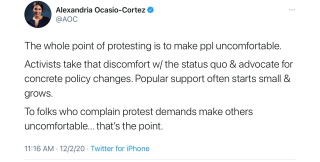 Here we see an evening photo of the mostly peaceful event. Here we see video of the action:

Boy do I need a Mea Culpa. How could I put up all those wrong event photos. I sure hope you don't think I'm auditioning for CNN. Fortunately I didn't put up the ones of  "mostly peaceful" protests in Portland or Seattle.

Now here we see our nation's finest in action. 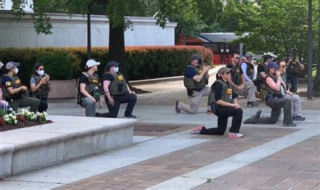 I think I might have overdone it. Please Stand Bye.

Scenes from inside the Capital building:

Truly some Profiles in Courage. Brave Sir Robin must be a role model. Then there's these guys: 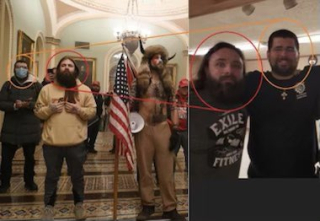 Bernie Kerik says two of them on (circled in red) were with BLM protests back in June. False Flag? Agents Provocateur?  How dare you think that.

However it looks like Cruz and Cotton, along with Rubio and Romney, all missed their Yeltsin moment. So did Pence and Pelosi. 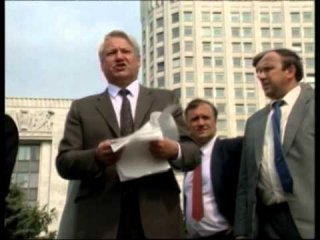 Yes, somebody might actually have tried to shoot that man.

False Flag? How dare you think that. 74,000,000 people voted for Trump, but now the left will craft a campaign of Covid as the plague  that there is ingrained hatred, bigotry and systemic racism amongst those individuals, especially those who went to D.C., regardless of what they did there. If you remember Christine Beasley Ford, if you remember Nathan Phillips and the Covington kids at the Lincoln Memorial, if you remember 15 days to slow the spread – you ain't seen nothin' yet. 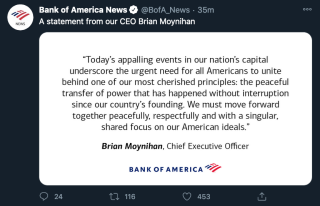 Aint' the internet grand. You can signal your virtue before the facts are even in. Someone should tell him the tranfer of power isn't today, but the 20th, and also  remind him of who did what to whom. As seen here:

Closing summary: The President called on all supporters to be peaceful and to return home. (Facebook edited the first 15 seconds of the most recent video released by the President of the United States, the 15 seconds that mentioned the stolen election. None dare call that suppression of news.) Update: Facebook either deleted it or someone else did. Sorry. Time, or news suppression, flies.  "… isolate, marginalize and eliminate the message of President Trump." as Sundance put it.

On a bright note all media sources say this was the most secure election in national history.  I expect they'll say the same thing about Georgia's run off election yesterday, and all future American elections. Reports are that the Senate is due to reconvene tonight (if they have not done so already) and ram through the landslide Joe continue their business. I'm sure the soon to be inaugurated president's first 100 days will be epic. I can feel the reconciliation in my blood.

Caption photo is of the Black Panthers inside the Capital building in 1967.

Also, it was an unarmed white woman shot and killed inside the Capital building today -by the Capitol Hill Police. Fear not, no police officers are going to get charged in that shooting.

What do I think of the actions?

Now, what color is your revolution?  Sure looks like the standard playbook in action, but then I'm just a rube of a middle manager in the automotive industry who got a rude awakening when he actually ran for office more than a decade ago.

One final closing thought. This is only day 6 of the new year. I wonder what tommorrow will bring?