Posted on February 5, 2021 by Andrei Martyanov 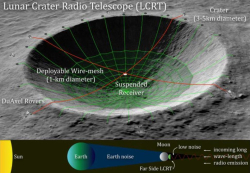 First, I want to give a tip of the hat to Martin Oline who posted a link to a fascinating article about a NASA concept for establishing a radio telescope on the far side of the moon. I found watching the embedded video to be a surprisingly enjoyable experience. This video presented at the NASA Innovative Advanced Concepts Symposium in September 2020 by Saptarshi Bandyopadhyay, a robotics technologist at NASA JPL  at Caltech. His accent may take a little getting used to, but I was immediately transported back to the physics lab at RPI. Our lab team constructed a Satyen K. Das to English dictionary to aid in our study.

This project is exciting on several levels. It is a unique and bold idea for space exploration. It is a challenging and intricate robotics problem. And it is a revolutionary advance for radio astronomy that may answer many questions about the origin of the universe. I find it especially exciting because it is eminently doable. I have a feeling we’ll be watching this in real time this decade.

This won’t be the first piece of radio astronomy on the far side of the Moon. The Chinese Queqiao relay satellite and Chang'e 4 lander are engaged in some radio astronomy tasks right now from the Von Karman crater, but it doesn’t come close to the scope of this NASA concept.