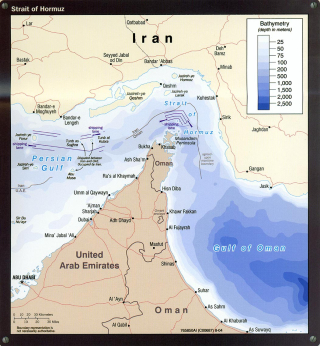 Newt Gingrich once explained to me whilst sitting in my map room in the Pentagon how it was  that Japan decided to go to war against the United States in World War II.

He recounted that the decision had much to do with US embargoes of sales to Japan of strategic commodities such as; scrap steel, rubber and oil.  Japan in the late 30s was resource poor and skills rich.   The government was then in the hands of a clique of militaristic nationalists intent on winning lebensraum for their island empire.  To accomplish that, the Tojo government needed the instruments of war as well as a lack of effective US and British resistance to their ambitions.

The embargoes of the materials needed for Japanese industry were seen by the government as a major obstacle to territorial expansion and a profound indication of the permanent hostility of the United States, a country that was the only other serious Pacific Ocean naval power as well as the possessor of a major land base in the Philippine Islands, then an American territory.  With these beliefs as background, the Imperial War Council met in 1941 to consider options.  The Navy tended to believe that it could not win a protracted struggle with the US, but the Army insisted that whatever the risk Japan must fight the US to find its place "in the sun."  After long discussion the council recommended war to the Emperor in the belief that unless they were willing to fight the US and Britain they "would not be the men they had thought they were."

IMO we are creating an analogous situation in US-Iranian relations.  The neocon imperialists present in both parties are riding high in the foreign policy apparatus of the United States.  As part of their program of gaining a thinly disguised global hegemony they are steadily squeezing Iran into a smaller and smaller "box."  The abandonment of JCPOA and the demand for a new agreement that would require Iran to abandon any effort to be a regional power is at the core of that effort.  The insistence that Hizbullah, Hamas and the IRGC are terrorist groups that may not be maintained or supported is a direct challenge to Iranian sovereignty.  As I have previously written, the terrorist designation of these groups makes them legal targets for military action under the US AUMF.  Add to these things, the effort to reduce Iranian oil exports to zero and you may well have a situation in which the Iranians decide that they must hit back or accept that they are not the men they thought they were.  pl