No need for the IC, the US Government has U-tube and Facebook 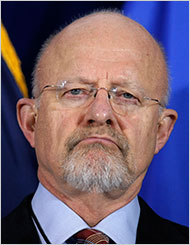 Clapper should be frightened.  The State Department says it relies on videos posted on the internet for its intelligence.

John Kerry left his boat today long enough to deliver a virtual declaration of war against Syria.  Obama doesn't even have the balls to do this for himself?

Before walking from the Foggy Bottom briefing room without taking questions, Kerry informed the world that he and the president were absolutely sure that the Syrian government had used CW en masse against people in the Damascus suburbs.

Evidence?  He said that he had seen the videos and pictures on the internet and that they tore open the wounds of his heart once again.  That was all the evidence that he mentioned except to claim that the US Government has more information that it will make available at some future time.  IMO this is likely to be after the war is well under way, and construction of "decks of face cards" has begun.

Kerry expressed great outrage that a country would deliberately kill large numbers of civilians.  It remains unproven that the Syrian government did that, but perhaps the US and the British should remember such names as Tokyo (100,000 Japanese civilian dead in one night), Hamburg, (God knows how many), etc.

This scenario is so pathetically like the Iraq thing.  The US is now pressuring the UN to withdraw its inspectors from Syria.  We did that in Iraq when the UN couldn't find any WMD.

Kerry says that doubters should examine their moral compasses.  How pathetic he is.  pl

64 Responses to No need for the IC, the US Government has U-tube and Facebook