Of shotguns and on-line checks. 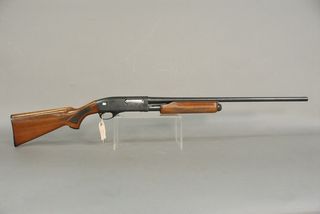 That is a Remington 870 pump action shotgun.   This is a sporting weapon.  You can hunt deer or people with it but mostly it is useful for hunting ducks, pheasants and rabbits.  Aaron Alexis bought one of these legally at a sporting goods store in Virginia.  The dealer put his paperwork through the online State Police run background check before selling him the shotgun.  The State Police ran the data through the national gun check data base and he came up clean.  Why?  He had no record of mental illness or of a conviction for a felony.  So, people who want to talk about the need for gun sale background checks should remember that this fellow was checked.

Now, with regard to Alexis' secret level security clearance.  He was given that in the Naval Reserve.  This is a low level clearance done on the basis of a records check.  It is good for ten years because to re-do the check more than that would be an onerous task given the number of people, both civilian and military, who have this level of clearance.  He was discharged from the Navy with an honorable discharge.  He subsequently sought employment with A Defense Department sub-contracting compnay in the field he had worked in when in the Naval Reserve.  This company applied through the appropriate agency for a secret clearance for this man.  The Navy was asked for input.  They replied that this honorably discharged sailor had posessed a secret clearance and that the periodicity of it had not expired.  On that basis the clearance was restored in JPAS, the on-line data base for contractor clearances.  With that in hand the hiring company went to the Navy Yard and asked that Alexis be given passes to enter the Navy Yard and Building 197, where he worked on whatever it was that they had a contract for.  He had worked there every day the week before the attack.

Alexis undocumented descent into madness escaped the attention of all.  Alexis was a paranoind schizophrenic.  This is a degenerative brain disease.  Such people can be quite plausible as to normality for short periods of time and attention.

This entry was posted in Current Affairs, Gun Control. Bookmark the permalink.

20 Responses to Of shotguns and on-line checks.