One Belt, One Road (FB Ali) 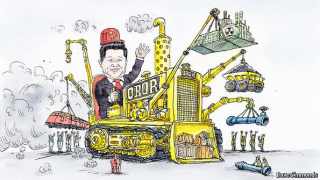 The Chinese project of "One Belt, One Road" (OBOR) has drawn remarkably little attention and comment in the West, especially in the USA. This is surprising, considering its tremendous scope, its implications for a large part of the world (with its potential to transform the lives of a sizable part of humanity), and its geostrategic significance.

Typically, the only voice talking about this (and other developments in China) in a sane and prescient manner is that of Amb Chas Freeman. (The neocons were right ‒ from their perspective ‒ in ensuring in 2009 that he would not be able to officially influence US policy; the loss, a grave one, was their country's). He first talked at some length about OBOR in July 2015, and then again in June of this year. This post should be considered an updated summary; for a more detailed view I would recommend Mr Freeman's 2015 talk.

OBOR seeks to convert the Eurasian land mass into a single economy by interconnecting it with a network of roads, railroads, pipelines, ports, airports, and telecommunications links, and, based on these, to create a series of development corridors containing large zones of productive economic activity (and, ultimately, prosperity).

Supplementing this essentially continental development will be a maritime component (the "Road"), aimed at investing and fostering collaboration in Southeast Asia, Oceania, and North Africa, through several contiguous bodies of water – the South China Sea, the South Pacific Ocean, and the Indian Ocean. This will be achieved by developing suitable (deep water) ports and then building the infrastructure to link them to interior industrial zones and markets, e.g, Piraeus (in Greece), Zarubino (in Russia), Djibouti and Mombasa (in Africa), Kyaukpyu (in Myanmar) and Gwadar (in Pakistan).

Amb Freeman rightly called One belt, One Road "the largest and potentially the most transformative engineering effort in human history".

The scope of OBOR can be judged from China's plan to ultimately commit to it some 4 trillion dollars. Currently, the Chinese say, 900 deals in 60 countries are in place or are being negotiated or planned, with a proposed investment of $890 billion. Three "policy banks" have been set up by the Chinese government for OBOR projects with an initial capital of $82 billion. A Silk Road Fund has been established with a capital of $40 billion. China has sponsored the Asian Infrastructure Investment Bank with a capital of $100 billion (it is likely to invest mainly in OBOR projects).

The vast majority of these OBOR projects will be planned, designed and managed by Chinese enterprises, with local partners. Where resources (such as energy, cement, etc) are unavailable, the Chinese will set up local plants to produce them. The Chinese companies will be given low-interest loans for their projects, while the local partners (either state or private enterprises) will be financed from cheap loans and grants provided by the Chinese government to the country.

Naturally, OBOR is not a purely altruistic project; China will derive major short-term and long-term benefits from it (but it will also greatly benefit the lands and peoples covered by it). It will enable China to invest its huge foreign reserve holdings (some $3.5 trillion at the end of 2015, mostly in US assets) mainly in Chinese enterprises, without the negative effects that such an investment within China would produce (over-capacity, rising costs, environmental effects, etc). It enables the utilisation of the large developmental capacity currently existing in China that was built up in its industrialisation and infrastructure development drive, and which is now surplus to its needs. The investments in OBOR, and its successful development, will make it much easier for China to break out of the present international financial system ruled by the US dollar.

One of the OBOR projects likely to be completed early is the China Pakistan Economic Corridor (CPEC). Since many of its features are fairly typical of these projects, it is worth considering in a little more detail. Basically, the project is to link the Indian Ocean port of Gwadar in Pakistan to the Chinese rail hub of Kashgar, a distance of some 2000 miles through some of the highest passes in the Himalayas (involving some 125 miles of mountain tunnels). This corridor will consist of road, rail, oil and liquefied gas pipelines, and fibre optic cable links. Industrial plants, most of them related to energy, will be set up in the corridor. Some $46 billion is earmarked for the whole project: $34 billion for energy projects and $12 billion for infrastructure. An "Early Harvest" section of the plan will see some $26 billion invested in projects slated for completion by 2018.

Though China is pushing OBOR as a (collaborative) economic project, it obviously has significant geostrategic implications. In seeking to create a Eurasian bloc, China is resurrecting the concepts of the Heartland and the World Island that Halford Mackinder first wrote about, a century ago, as the repository of Land Power that will unavoidably compete with Sea Power. Today, the latter is personified by the United States, and it will inevitably see such a development as a challenge to its current dominating position in the world. Conflict is inevitable; what shape it takes may well determine the fate of humanity.

Russia is also in an interesting position with respect to OBOR. On the one hand, China is its ally against the pressures being applied to it by the US and Europe; on the other, it has hitherto been the primary player in this duo (as Russia has been historically in Eurasia). It will not be easy for Putin to cede that role to Xi. However, he does not have much choice. His trump card is Russia's military strength, especially in nuclear weapons; China needs these to offset the danger of the use of such weapons by the US against it. Thus, one can expect that it will offer Russia a special place in OBOR; this will make it easier for Russia to participate in it. Also, Russia cannot ignore the wider (and, for it, positive) strategic significance of these developments vis-a-vis its relations with the US and the West.

These future developments highlight the unfortunate nature of the policies being currently followed by the US. Its worldwide expression of military power, steered by the neocon foreign policy establishment (the Borg, as Col Lang calls it), and its equally aggressive economic and financial policies (pursued by the plutocrats who control them), have created a backlash, not only in other lands but also within the country. Nevertheless, there appears to be this underlying assumption that matters can continue indefinitely as they are now (and, if they tend to veer off course, brute power can be used to bring them back on track).

Even as the US rides forth as did the Four Horsemen of the Apocalypse, a new world is being born on the Eurasian continent, a world that, if allowed to survive, may hold the promise of a prosperous new age for billions of deprived human beings.

This entry was posted in China, Current Affairs, Pakistan, Russia. Bookmark the permalink.