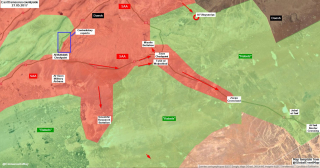 Although details are scarce and often conflicting, it appears the R+6 operation to reclaim Syria's southern border is proceeding. It is also about to come face-to-face with the Coalition plan to carve out a safe area in this part of Syria. We shall see who blinks first.

“Russian paratroopers and special forces arrived in the Al-Sweida Governorate of southern Syria this week, following the U.S. attack on a pro-government convoy near the Iraqi border-crossing, a military source told Al-Masdar News last night. The Russian military personnel will take the role of advising the Syrian government troops in southern Syria, while also helping to deter any potential response from the U.S. and Jordanian forces that have carved a niche in the Al-Sweida and Homs governorates.

According to some media activists in southern Syria, the Russian forces are planning to build a base along the Al-Sweida Governorate’s border with Jordan; however, this could not be confirmed by Al-Masdar News. Rumors have also surfaced regarding the deployment of the 31st Brigade of the Russian special forces; they are allegedly meant to engage the enemy forces and help the government troops seize the Iraqi border-crossing.”  (AMN)

This Russian Brigade is the 31st Guards Air Assault Brigade based in Ulyanovsk. The brigade consists of three mechanized infantry battalions (2 air assault, 1 airborne), an artillery battalion (also mechanized), an aviation squadron and other support and combat support units. This brigade forms the core of Russia's immediate response force. In addition to its high state of combat readiness, it is well trained in peace keeping/peace enforcement operations. I have seen no reports of this unit entering combat. However, Russian advisors and spetsnaz target acquisition teams appear to be liberally spread among the SAA, NDF and other units involved in Operation Grand Dawn. There are also enough Russian aircraft and helicopters in the area to make it look like a Moscow air show.

Jaish Maghawir al-Thawra targeted the SAA allegedly using a US-made Switchblade suicide drone. It is known that this type of suicide drones are operating only by the US Special Forces.

On Saturday, the SAA deployed the 800th Battalion of the Republican Guards in the eastern Zuluf reserve area on the Syrian-Jordanian border.  The battalion 800 is among the best equipped Syrian forces, and all of its tanks have active protection systems Sarab-1 or 2 and thermal sights, which may indicate that the SAA may be preparing for a possible confrontation with US forces in al-Tanf.”  (South Front)

Those Switchblade suicide drones are not really suicide drones. They are tactical reconnaissance and attack drones with a ten kilometer range that are launched from a hand held launcher. They do carry an explosive charge and are, in effect, small guided missiles. They were recently developed on a SOCOM contract for use by special operations forces. They have been in use in that part of Syria for months. In this recent attack using Switchblade drones in east Suweida, SAA/SSNP forces shot down seven drones. I imagine it was like skeet shooting. In the hollow Army days of the 70s, we would practice engaging target drones with nothing but M-16s and M-60s. We got damned good at it.

“The US-led coalition warplanes dropped warning leaflets on the Al-Tanf road after Syrian Arab Army (SAA) advanced to the Shehmi area, 55 km from Al-Tanf town. The leaflets warned the SAA from continuing its advance and asked it to withdraw to the Zaza Triangle. They also included sectarian expressions, according to local sources. According to the Syrian TV, the SAA managed to advance in the vicinity of the Scientific Research area in the eastern desert in the Suweida countryside. The SAA also repelled an attack of the US-backed Free Syrian Army (FSA) in the same area. It became clear that the presence of the FSA in this area is to keep threatening Damascus and to prevent the SAA from capturing the Iraqi border area and thus securing the unity of Syrian territory.”  (South Front)

The gauntlet has been thrown down. Who will blink first?

“The Arabic-language al-Hadath news quoted field sources as saying that the US and Britain have evacuated half of their forces that were deployed in Syria's al-Tanf border region, relocating them to Jordan.

Arab media outlets said on Tuesday that the Russian armored units entered regions along the Syria-Jordan border to fortify the Syrian Army's border posts and positions and seal the borderline.”  (FARS News Agency)

Judging by this FARS report, the R+6 is calling our bluff along the Syrian-Jordanian border. We came to the gunfight with Switchblades and leaflets. They came with well equipped, well trained and well supported forces like the 31st GAAB and the 800th Tank Battalion. I've seen reports that Russian jets have chased US jets out of the area on at least two occasions. The CJTFOIR has confirmed one of these incidents. There still may be surprises, but I think it is more likely it will end relatively quietly with the new unicorn army squatting on the Jordanian side of the border.

Just an educated guess on my part, but I imagine the 31st GAAB will pay a major role in securing the Syrian border from Suweida to Tanf and on to Bukamel. They will leave the lifting of the siege of Deir Ezzor to the SAA while they secure this southern flank. Another possibility is that the 31st GAAB will eventually play a part in the southernmost de-escalation zone. Given their training in peace keeping/peace enforcement operations, I believe this is a possibility. The Coalition and the Izzies will have to do some serious soul searching before they assist their jihadi allies in the face of the 31st GAAB.