Posted on December 19, 2019 by Andrei Martyanov 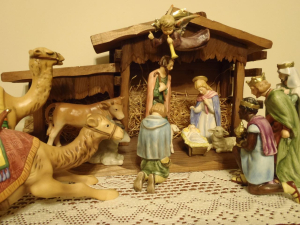 The enchanting image of the Christmas crèche, so dear to the Christian people, never ceases to arouse amazement and wonder. The depiction of Jesus’ birth is itself a simple and joyful proclamation of the mystery of the Incarnation of the Son of God. The nativity scene is like a living Gospel rising up from the pages of sacred Scripture. As we contemplate the Christmas story, we are invited to set out on a spiritual journey, drawn by the humility of the God who became man in order to encounter every man and woman. We come to realize that so great is his love for us that he became one of us, so that we in turn might become one with him.

With this Letter, I wish to encourage the beautiful family tradition of preparing the nativity scene in the days before Christmas, but also the custom of setting it up in the workplace, in schools, hospitals, prisons and town squares. Great imagination and creativity is always shown in employing the most diverse materials to create small masterpieces of beauty. As children, we learn from our parents and grandparents to carry on this joyful tradition, which encapsulates a wealth of popular piety. It is my hope that this custom will never be lost and that, wherever it has fallen into disuse, it can be rediscovered and revived.  (Pope Francis)

Pope Francis issued this apostolic letter during his recent visit to Greccio, the site of the first nativity scene or Christmas crèche. I never knew that Saint Francis was the creator behind this Christian phenomenon. Francis, the Pope not the Saint, goes on to explain the meanings behind the symbology and the proper place of the nativity scene in the faith and lives of Roman Catholics. You don’t have to be “raised by Jesuits” to appreciate this letter. It is far more a historical and anthropological study than an evangelical sermon… unless you’re looking for an evangelical sermon. Enjoy.

I was attracted to this letter because the nativity scene was part of every Catholic house at Christmas I ever entered in my life. My house is no different. Every year I set up the same Goebel figures that I set up for SWMBO’s and my first Christmas in our own house in Mililani Town, Hawaii. I think we bought the set at the Pearl Harbor Base Exchange. It wasn’t all that expensive and we’ve only added the two camels and a sheep in all these years. We like it and it serves to remind us every day of the season of the meaning of Christmas to Christians.

When I was growing up, my family would make at least one trip to downtown Waterbury, Connecticut to see the Christmas decorations and lights. One of the highlights was the massive Christmas crèche set on the city green. It included elaborate cave and village scenes with scores of figurines. Very impressive and without a hint of controversy in the late 50s and 60s. Waterbury went well beyond the Christmas crèche as evidenced in this story of a unique landmark of the 50s, 60s and 70s.

Merry Christmas to all,

This entry was posted in Christmas, TTG. Bookmark the permalink.

7 Responses to Pope Francis on the Nativity Scene – TTG