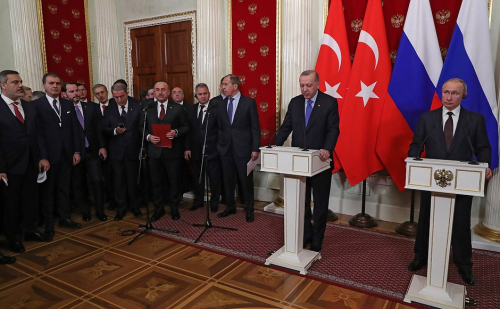 For weeks Recep Tayyip Erdogan has been threatening to push the Syrian Arab Army back to the lines that existed in northwestern Syria at the time of the September 2019 agreement he struck with Vladimir Putin for a de-escalation zone, there. After the Feb. 27 incident in which a Syria air strike killed 33 Turkish soldiers it looked like that operation was on, but by the time Erdogan boarded his plane for Moscow to meet with Putin today, it had clearly failed, with the SAA having regained most of the territory that it had lost to the jihadi groups last week, despite the fact that the jihadis were backed by Turkish artillery and drone fire. So, Erdogan landed in Moscow in a position of having to save face, rather than in a position to make demands of Putin.

After six hours of negotiations, Putin and Erdogan emerged, accompanied by their relevant ministers, to announce that they had agreed to a new cease fire, recognizing the status quo as it existed today, rather than that of a year and a half ago. According to Sputnik News, it includes the following main points:

* A ceasefire in Syria’s Idlib province will start at 00:01 on 6 March.
* Russia and Turkey will start joint patrols on the M4 highway in Syria. The patrolling will take place from the settlement of Tronba, located 2km west of the strategic town of Saraqib, to the settlement of Ain al Havr.
* A 12-km security corridor for Syria’s Idlib province will be established to the north and to the south of the highway. “The specific parameters of the functioning of the security corridor will be agreed upon by the Ministry of Defense of the Russian Federation and the Turkish Republic within seven days”, Russian Foreign Minister Sergei Lavrov said.
* Both countries agreed on efforts to prevent further aggravation of the humanitarian situation in Syria.
* All additional protocols to the document will come into force from the moment of its signature on 5 March.

The tone of the meeting, however, was set by Putin at the outset with a solid rebuke of Erdogan for his operation in Idlib. In effect, he said, we're sorry for the losses you suffered but you have to stop supporting terrorists in Syria. "The situation in the Idlib zone in Syria has deteriorated so much that we need to have a direct and personal discussion," Putin said in opening remarks before they went behind closed doors. "First of all, I would like to express our sincere condolences over the death of your military personnel in Syria. Loss of life is always a big tragedy. Regrettably, as I have told you by telephone, nobody, including the Syrian military, was aware of your troops’ location. At the same time, there were casualties among Syrian servicemen as well. The Syrian army reported major losses."

"Therefore, we need to discuss everything and analyse the current developments so that, first, this does not happen again and, second, that this does not damage Russian-Turkish relations, which I know that you value as well," Putin concluded.

Erdogan, who seemed to have been chastened by the developments of the past few days, expressed more concern about not letting disagreements damage Russian-Turkish relations than getting what he wanted in Idlib, "I know that the entire world is watching us today and I think that the action and decisions we take today will definitely have a mitigating effect," he said. "This is a time when the relations between our countries have indeed reached a peak. Of course, this concerns the defence industry, trade and other areas; they continue developing. We believe and say that we need to make progress in this area. In fact, this is our biggest task, to move forward and develop our relations. I believe we will succeed."

The neo-con war party in washington, led by the likes of James Jeffrey, Lindsey Graham and others, who had scheming to split Turkey from Russia and provide Turkey with military support in Syria, are not happy tonight.