Posted on November 3, 2013 by Andrei Martyanov 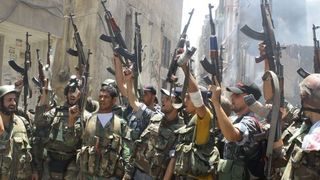 Forces loyal to the Syrian government are taking advantage of deepening rifts among Syria’s feuding rebels to advance into rebel-held territory in the northern part of the country, overturning some long-held assumptions about the war.

The resignation on Sunday of a top leader in the U.S.-backed Free Syrian Army further underscored the extent to which rebel infighting is undermining the effort not only to topple President Bashar al-Assad but also to hold on to territories won by the opposition in the past two years of conflict.Col. Abdul Jabbar Akaidi, one of the chief recipients of what little American aid has been provided to the rebels, said he was standing down to protest the rebel bickering, which he blamed for the capture on Friday by Assad loyalists of the strategic town of Safira, southeast of the key city of Aleppo.

The fall of Safira restored a vital supply link between Damascus and government forces holding out in the divided northern city and put regime loyalists on track to challenge other opposition strongholds in the province, almost all of which has been under rebel control for more than a year. Rebel commanders said the town fell after Islamist brigades failed to respond to a call for reinforcements by the Tawheed Brigade, Aleppo’s biggest battalion, which was forced to flee under a withering aerial bombardment inflicted by the Syrian air force. (Wash Post)

Things aren’t going too well for the Syrian rebels. Not only that, the Syrian army is evolving into something far more dangerous to its enemies than the conventional 60s era Soviet model army it once was. It is also gaining experience in joint operations with Hizbollah, the Quds Force and Iraqi Shia volunteers. Israel is worrying about the wrong threat.

On 23 October, the blogger “emptywheel” made a few observations in a posting entitled “On that Acknowledged Covert Op in Syria.”

“Obama uses “covert” status as a legal fiction, nothing more"

"First, consider the coverage of the covert op — one acknowledged explicitly by Chuck Hagel in Senate testimony. NYT says President Obama actually signed the Finding authorizing arming the rebels in April, not June, as Hagel claimed, but Obama did not move to implement it right away.”

"Where the hell was the IC getting its rosy scenario about Assad’s overthrow?"

"The other striking thing about the story is how it portrays Obama’s policies to have been driven by (unquestioned by the NYT) overly rosy assessments of Assad’s demise. It starts by portraying the 2011 belief Bashar al-Assad would fall as a near certainty (note the NYT doesn’t mention the other regimes — Saudi Arabia, Bahrain, Yemen, among others, that haven’t fallen either).”

Emptywheel is off the mark on her first observation. A few months between the signing of a presidential finding and the beginning of the misguided effort to arm the rebels is not unusual. If anything, it's too hasty. The presidential finding to seek regime change in Iraq was signed by Bush the Elder shortly after the Gulf War. The INC began receiving covert money shortly after that. Clinton signed the Iraq Liberation Act in 1998 and the money flow increased dramatically. GW Bush’s AUMF came in 2002. In this decade plus, our strategy never strayed far from anybody but Saddam. Obama’s strategy for Syria is equally “well thought out…” anybody but Assad. The goals are equally misguided, but the process is normal and established.

Emptywheel’s second observation certainly has some merit. If this retiree can read openly available information while feeding the squirrels and see that Assad’s demise was never imminent, can’t our IC do the same? I would wager that the NSA has monitored damned near every communication on both sides of the conflict. The problem is that it is all in Arabic and talented linguists are in short supply in the IC. The CIA relies too much (IMHO) on bilateral relations for their intel. We have the Israelis and Saudis whispering in our ears like a couple of Grima Wormtongues poisoning our assessments. Even with these limitations, the IC probably does manage to have a good idea of what’s going on. However, the Israel firsters and R2P crowd aggressively push their own agendas. In the end, the policy makers believe what they want to believe. The IC can do only so much.