Posted on September 14, 2013 by Andrei Martyanov 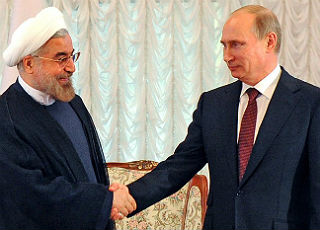 Some Iranian news agencies have reported that a message from Obama was carried to Iran last month by Oman’s ruler, Sultan Qaboos bin Said, whose country was a mediator before — when Iran released three Americans convicted of espionage despite claims they innocently crossed the border while hiking in Iraq in 2009. The Obama administration has indicated interest in possible groundbreaking one-on-one nuclear talks with Iran after nearly 35 years of diplomatic estrangement. Envoys from Iran and the U.S. have previously held meetings on Iraq mediated by Baghdad officials.

The push for possible Iran-U.S. dialogue received a boost by the alleged chemical weapons attack in Syria, which the U.S. and allies have blamed on Assad’s forces. Obama has suggested Iran — a strong opponent of chemical weapons — could help pressure ally Assad into accepting a Russian-brokered plan to surrender stockpiles of lethal gas to international control. Iran suffered chemical attacks from Saddam Hussein’s forces — then backed by Washington — in the 1980-88 war with Iraq. (Washington Post)

The Obama administration on Tuesday eased longstanding restraints on humanitarian and good-will activities between Iran and the United States, including athletic exchanges. It was at least the second American government relaxation of Iranian sanctions this year and came as Iran’s new president, Hassan Rouhani, has signaled his desire to improve relations.

The Treasury Department’s Office of Foreign Assets Control, which oversees the sanctions on Iran, said in a statement that it had cut the bureaucracy for obtaining exemptions in order to expedite the provision of health services, disaster relief, wildlife conservation and human rights projects in the country. Also authorized are “activities related to sports matches and events, the sponsorship of sports players, coaching, refereeing and training, in addition to other activities.” The Treasury statement said the action, which eliminates requirements for special exemption licenses on a case-by-case basis, reflected what it called “this administration’s commitment to reinforcing ties between the Iranian and American people.”  (New York Times)

I found it interesting and refreshing that the USG was offering this small olive branch on humanitarian and good-will activities to Iran at the same time we were strenuously pushing for striking Syria. Obama's message expressing interest in one on one talks with Iran is even more interesting and refreshing. Perhaps AIPAC is losing its grip. I think its more likely that the citizenry is starting to find its voice. Don't mess with our guns. Stop spying on us and keep us out of these damned Mideast wars.

Rouhani appears intent on pursuing serious talks over his country's nuclear program.  He is looking for direct talks with the U.S which may begin during his impending visit to the UN. He is also holding separate talks with Russia and China, which began last week with the Kyrgyzstan summit of the Shanghai Cooperation Organization. He invited Putin to visit Tehran while he was there and Putin accepted. I'm sure Iran will also play an important part in the dismantling of Syria's CW program. That part will be instrumental in establishing "muscle memory" for all parties seeing each other as serious negotiating partners.

Russia is not an ally of Iran, nor is it really an ally of Syria. However, it is in Russia's interest that the Salafist jihadists do not prevail in Syria or anywhere else. That's what drives their actions in Syria, not any lingering cold war enmity with the U.S. I believe Russia's more muscular involvement in any negotiations with Iran will modify the shrill cries for punishing military strikes and non-negotiable demands that have characterized the debate thus far. Who knows, perhaps compromise among statesmen will become fashionable.

And how does Netanyahu view all this?

You knew it was coming. After several weeks of prudent and calculated silence; after numerous clarifications that Israel in neither involved nor has a stake in the Syrian civil war; after consenting to a request to assist President Obama in his efforts to muster support in Congress and all that time knowing that a U.S. strike on Syria may not necessarily benefit Israel, Prime Minister Netanyahu just had to say something.

And in the best tradition of such statements, both the substance and the timing were off, unhelpful and meaningless. Evoking just the first half of the sage Hillel’s ancient maxim: “If I am not for myself, who will be?” Netanyahu essentially criticized the U.S., implying that in the case of Iran, Israel will have to rely only on itself since the U.S. approach to Syria can and should be projected into the future in respect to Iran policy. (Haaretz)

Those who were pushing for a punishing series of strikes on Syria didn't give a damn about the dead in Ghouta or the 100,000 other dead in that civil war. It was all about Iran. Even at the cost of enabling the Salafist jihadists in Syria, they saw a golden opportunity to drive Iran further from the world community and away from a peacefully negotiated settlement. I'm pretty sure Netanyahu, AIPAC and their other "fellow travellers" in the U.S. are sorely disappointed at the present turn of events. They will try to derail both the Syrian CW talks and any new Iranian nuclear talks. The last thing they want is the U.S. seeing Iran as a viable negotiating partner rather than as an existential threat.

Where will this all lead? Well, that's for this committee to discuss.

The Haaretz editorial is now behind a paywall/registration wall. I wouldn't register without going through an anonymous shell account with ssh and a bogus name, but that's just me.

This entry was posted in Iran, Middle East, TTG. Bookmark the permalink.