The document dump from the Department of Justice on the Michael Flynn case continues and the information is shocking and damning. It is now clear why previous leaders of the Department of Justice (Sessions and Rosenstein) and current FBI Director Wray tried to keep this material hidden. There is now no doubt that Jim Comey and Andy McCabe help lead and direct a conspiracy to frame Michael Flynn for a “crime” regardless of the actual facts surrounding General Flynn’s conduct.

The most stunning revelation from today’s document release is that the FBI agents who investigated Michael Flynn aka “Crossfire Razor” RECOMMENDED on the 4th of January 2017 that the investigation of Flynn be closed. Let that sink in. The FBI agents investigating Flynn found nothing to justify either a criminal or counter-intelligence investigation more than two weeks before Donald Trump was inaugurated as President. Yet, FBI Director Jim Comey and Deputy Director McCabe, with the help of General Counsel Jim Baker, Assistant Director for Counter Intelligence Bill Priestap, Lisa Page and Peter Strzok decided to try to manufacture a crime against Flynn.

The documents released on Wednesday made clear that as of January 21st, the FBI Conspirators were scrambling to find pretext for entrapping and charging General Flynn. Here is the transcription of Bill Priestap’s handwritten notes: 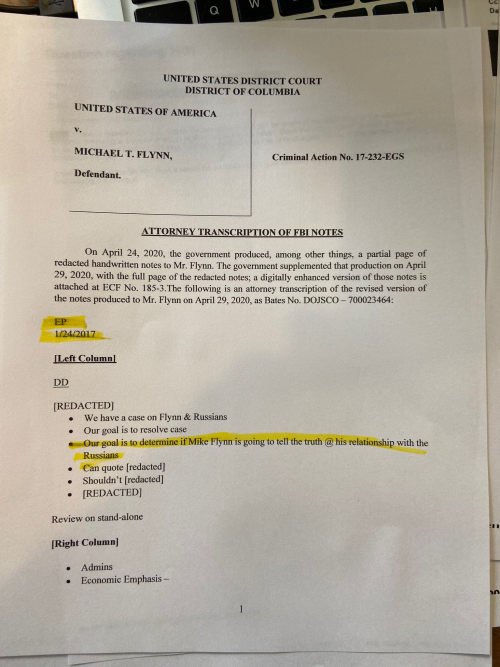 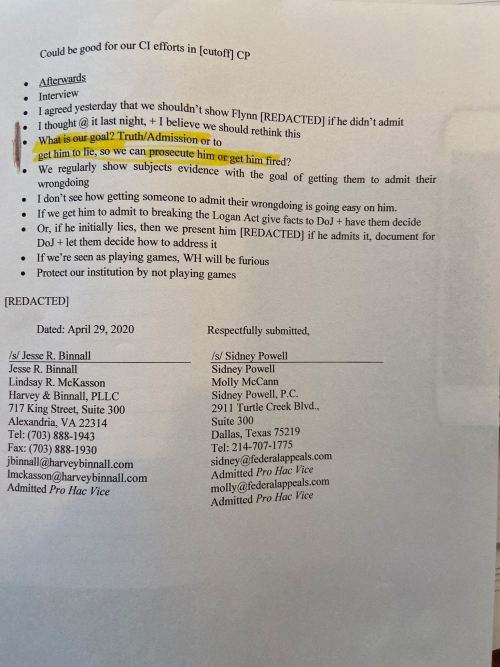 Apologists for these criminal acts by FBI officials insist this was all routine. “Nothing to see here.” “Move along.” Red State’s Nick Arama did a good job of reporting on the absurdity of this idiocy (see here). Former US Attorney Andy McCarthy cuts to the heart of the matter:

“They did not have a legitimate investigative reason for doing this and there was no criminal predicate or reason to treat him [Flynn] like a criminal suspect,” McCarthy explained.

“They did the interview outside of the established protocols of how the FBI is supposed to interview someone on the White House staff. They are supposed to go through the Justice Department and the White House counsel’s office. They obviously purposely did not do that and they were clearly trying to make a case on this.”

“For years, a number of us have been arguing that this looked like a perjury trap,” McCarthy said.

Today’s (Thursday) document dump reinforces the validity of McCarthy’s conclusion that this was a concocted perjury trap. The key document is the “Closing Communication” PDF dated 4 January 2017. It is a summary of the FBI’s investigation of Crossfire Razor (i.e., Mike Flynn). The document begins with this summary:

The FBI opened captioned case based on an articulable factual basis that Crossfire Razor (CR) may wittingly or unwittingly be involved in activity on behalf of the Russian Federation which may constitute a federal crime or threat to the national security. . . . Specifically, . . . CR had ties to various state-affiliated entities of the Russian Federation, as reported by open source information; and CR traveled to Russia in December 2015, as reported by open source information.

The Agent conveniently fails to mention that Flynn’s contacts with Russia in December 2015 were not at his initiative but came as an invitation from his Speaker’s Bureau. Moreover, General Flynn, because he still held TS/SCI clearances, informed the Defense Intelligence Agency (DIA) of the trip, received permission to make the trip and, upon returning to the United States from Russia, was fully debriefed by DIA. How is that an indicator of posing a threat to the national security of the United States?

The goal of the investigation is stated very clearly on page two of the document:

. . . to determine whether the captioned subject, associated with the Trump campaign, was directed and controlled by and/or coordinated activities with the Russian federation in a manner which is a threat to the national security and/or possibly a violation of the Foreign Agents Registration Act, 18 U.S.C. section 951 et seq, or other related statutes.

And what did the FBI find? NOTHING. NADA. ZIPPO. The Agent who wrote this report played it straight and the investigation in the right way. He or she concluded:

The Crossfire Hurricane team determined that CROSSFIRE RAZOR was no longer a viable candidate as part of the larger CROSSFIRE HURRICANE umbrella case. . . . The FBI is closing this investigation. If new information is identified or reported to the FBI regarding the activities of CROSSFIRE RAZOR, the FBI will consider reopening the investigation if warranted.

This document is dated 4 January 2017. But Peter Strzok sent a storm of text messages to the Agent who drafted the report asking him to NOT close the case.

This is not how a normal criminal or counter-intelligence case would be conducted. Normally you would have actual evidence or “indicia” of criminal or espionage activity. But don’t take me word for it. Jim Comey bragged about this outrageous conduct:

Comey is a corrupt, sanctimonious prick. I suspect he may not think what he did was so funny in the coming months. He may have forgotten saying this stupidity, but the video remains intact.

The documents being released over the last week provide great insight into Attorney General William Barr’s strategy. He is not going to entertain media debates and back-and-forth with the apologists for treason. He is letting the documents speak for themselves and ensuring that US Attorneys–who are not part of the fetid, Washington, DC sewer–review the documents and procedures used to prosecute political figures linked to President Trump. Then those documents are legally and appropriately released. Barr is playing by the rules.

We are not talking about the inadvertent discovery of an isolated mistake or an act of carelessness. The coup against Trump was deliberate and the senior leadership of the FBI actively and knowingly participated in this plot. Exposing and punishing them remains a top priority for Attorney General Barr, who understands that a failure to act could spell the doom of this Republic.

This entry was posted in government, Justice, Larry Johnson, Russiagate. Bookmark the permalink.