Posted on November 17, 2016 by Andrei Martyanov 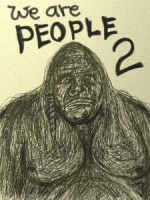 Earlier today, Colonel Lang momentarily emerged from his reveries to grace us with a bit of wisdom. Actually it was more of a “druther” than a bit of wisdom. Seems he would rather be a Sasquatch hunter than the Director of National Intelligence. He’d rather be stalking through a chilly forest in a drizzling rain than wearing a suit and dealing with the shameless political hacks at Liberty Crossing or in the halls of Congress. Not only does he want to search for Sasquatch, but he wants to ensure the “Sasquatch People” are protected from the inevitable ravages of mankind. Not too shabby a druther. I’d happily join the Colonel in this noble quest. DOL

In a peculiar coincidence, I discovered that the 2016 Sasquatch Summit will be held in Grays Harbor, Washington on 18 and 19 November. Well known Sasquatch researchers  will present “two days of physical proof about Sasquatch, habitat, audio, video, photos, casts and more. In addition, [they will explain] how to identify hoaxes, the differences between authentic tracks and fake, plus tons more.”

I also found a piece in “The Atlantic” entitled “Why Bigfoot Sightings Are So Common Across Cultures.” Only three weeks old, this piece explores mankind’s need to believe in such creatures.

“Bigfoot might or might not roam the primeval forests of the Pacific Northwest, watching us and avoiding us, a reminder of our deepest, animalistic past. But whether or not there is an actual creature, the archetypal Sasquatch is, in his own way, very real.“  (The Atlantic)

I choose to believe if for nothing else than for the sheer adventure of it.

Why Bigfoot Sightings Are So Common Across Cultures