Some Thoughts on Monuments – TTG 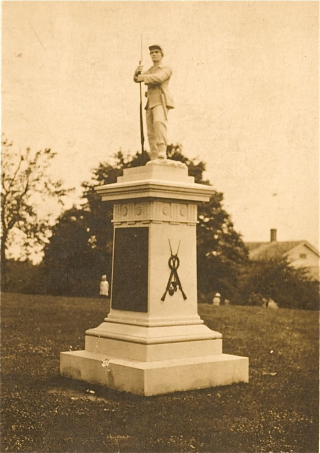 There is much hysteria lately about monuments. To various people they assume the mantels of symbols of Southern heritage or ugly reminders of slavery, segregation and white supremacy. I, however, have never been prone to hysteria. Whether it was engaging in a fifty foot free fall onto lava rock or being bracketed by naval gunfire, I remained calm. It’s probably a brain defect.

Yesterday’s Free Lance-Star ran a ran a front page story on calls on the Fredericksburg City Council to move the slave auction block at the corner of William and Charles streets to a museum. The other side of the debate contends that the auction block should remain where it is. “We need to sometimes feel shock, pain and remorse to know how far we’ve come, what has been done, what has been sacrificed,” one city council member said. The debate is heart felt, respectful and calm. I am very proud of that fact.

I am of the firm conviction that the auction block should stay where it is, but with a more meaningful and appropriate marker than the one that exists now. I first saw the auction block in the Summer of 1988 when I first moved to the area. It gave me a depressed and uneasy feeling. I felt the same thing when I walked through Dachau several years later. This artifact of Fredericksburg’s history must stay in place and bear witness to our past.

During this visit in 1988, I also visited the sunken road and the Kirkland Memorial commemorating the story of South Carolina Sergeant Richard Rowland Kirkland bringing water to wounded Union soldiers lying in front of Confederate positions at the sunken road during the first battle of Fredericksburg in December 1862. Although the story of “The Angel of Marye’s Heights” may not be historically accurate, the memorial is a moving tribute to a soldier’s compassion for another soldier. The monument was erected and dedicated during the Civil War Centennial in 1965. I know of no demonstrations occurring for or against this memorial. I would hope that anyone trying to stage a political spectacle near these monuments  in these turbulent times would be run out of town. The same goes for the Meade Pyramid on Prospect Hill or any of the Confederate monuments within the Confederate cemetery. The annual lighting of luminaria in this cemetery and in the nearby National cemetery remain respectful and moving commemorations. Things are as they should be in Fredericksburg.

The situation in Richmond is quite different. Here the potential for strife and violence is real. It was not always the case. As late as last May, Civil War historian Kevin Levin wrote “What Richmond Has Gotten Right About Interpreting Its Confederate History.” At that time Mayor Stoney still ruled out the removal of any of the Confederate monuments along Monument Avenue. Rather, in recent years, Richmond chose to bring in other monuments to balance the significant and quite beautiful Confederate commemoration sites. Although not at all related to the Civil War, the Arthur Ashe monument was installed on Monument Avenue in 1996. Many white Virginians were aghast that a monument to a black tennis player would be placed on what they consider hallowed ground. Many black residents of Richmond were upset that a monument to their native son was so close to monuments to slave holders. But Arthur went up without violence and now presides over the annual Confederate commemoration parade along with Davis, Lee, Jackson and Stuart.

In April 2003 a life-sized statue of Lincoln and his son Tad sitting on a bench was installed on the site of Tredegar Ironworks. Behind Lincoln and his son is a wall with Lincoln’s words “To Bind Up the Nation’s Wounds” inscribed upon it. Although this monument memorializes the historically significant event of Lincoln’s visit to Richmond just days after it fell to Union forces in April 1865, there was loud opposition to the monument’s installation. Bragdon Bowling, then president of the Virginia division of the Sons of Confederate Veterans (SCV) was one of the leaders of the opposition. He described the Lincoln monument as "a slap in the face of brave men and women who went through four years of unbelievable hell fighting an invasion of Virginia by President Lincoln.” He further said the statue "is a not-so-subtle reminder of who won the war, and who our heroes should be." There were several hundred protesters at the event, many wearing Confederate uniforms and carrying the confederate battle flag. Bowling saw the monument as “a painful reminder of who won the war.”

Well, whether you call it the Civil War, the War Between the States or the War of Northern Aggression, it is a fact that Lincoln’s Union won that war. That fact is also part of the city’s heritage. Perhaps Bragdon Bowling should heed his own words when he offered advice for those who oppose Confederate monuments “turn your head if you don’t like it.” I think this Lincoln memorial, far more modest and contemplative than the Confederate statues on Monument Avenue, is a fitting addition to Richmond.

There are several other recent additions to Richmond’s acknowledgement of her heritage. There is the Richmond Slavery Reconciliation Statue installed in Shockoe Bottom in 2007. Identical statues stand in Liverpool, England and in the Republic of Benin. Efforts to preserve Lumpkin’s Slave Jail and create a Slavery Memorial Park in Shockoe Bottom around that archeological site and a nearby African burial ground are underway. I’d much rather see this go forward than see Richmond or Virginia expend resources moving any Confederate statues from Monument Avenue. Given our current legal statutes, that idea is a non-starter anyways.

There is one other event that I would like to see memorialized in a grand manner in Richmond. It consists of the events described in this dispatch from the front.

We took Richmond at 8.15 this morning. I captured many guns. The enemy left in great haste. The city is on fire in two places. Am making every effort to put it out. The people received us with enthusiastic expressions of joy.

The events of that moment are well described in this account from Mark St. John Erikson, a reporter for the Daily Press out of Newport News. Whenever I visit my younger son, I pass the two highway plaques that now commemorate that event. I also remember passing the Surrender Tree, a massive white oak that stood close to the spot where Richmond Mayor Mayo surrendered the city to advancing Union troops. It fell during a derecho in 2012. Luckily, my son’s house escaped damage other than losing a few shingles.

The first Union infantry unit that marched into Richmond was the 36th Infantry Regiment, US Colored Troops. Many of the infantrymen in the 36th were former slaves from the Tidewater Virginia region. It was these former slaves who were greeted by the black residents of Richmond, slaves and freedmen, with such enthusiasm on what became Emancipation Day in Richmond. I would like to see this event memorialized in a grand way at a prominent location in Richmond. It would be a fitting counterpoint to the statues memorializing the Confederacy on Monument Avenue. History should be remembered.

P.S. – The photo at the top of this post is the Soldier's Monument in Prospect, Connecticut. I grew up in the house, a former glebe house, visible behind the monument. That soldier and I have had a close relationship as far back as I can remember. In first grade I marched around him with my classmates wearing shakos made from construction paper, carrying our American flags and singing patriotic songs. The tree at the far left is a scion of Connecticut's Charter Oak. I often climbed it as a youth.

This entry was posted in History, TTG, WBS. Bookmark the permalink.

88 Responses to Some Thoughts on Monuments – TTG