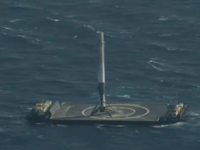 In a dramatic feat of engineering prowess, the private spaceflight company SpaceX successfully landed a reusable Falcon 9 rocket booster today — the second such landing for the company, and the first successful touchdown on a ship.

After separating from Dragon a few minutes after liftoff, the Falcon 9's first stage performed several flyback engine burns, then eventually lowered itself vertically onto a SpaceX drone ship that was stationed off the Florida coast. (Space.com)

On its fifth attempt, a Falcon 9 rocket finally makes a successful sea landing. This stuff excites me, even though this isn't the first booster landing. It’s how the rockets in the sci-fi movies always landed. It’s how I always landed my model rockets when I played with then as a child and dreamed of going into space. I have to smile at the name of the landing barge – “Of Course I Still Love You.” It says something about the crew that put this together. I like that attitude. It reminds me of the NASA Pirate Code written by John Muratore, a NASA engineer back in the day. I put it on the wall in the commercially covered office of my last detachment. Words to live by.

Pirates have to know what they’re doing.

If we fail, there is no mercy.

You’re operating outside the normal support structure of society. It’s all about knowing all the details.

Pirates live on the edge or just in front of the wave that is about to catch them.

Piracy is about taking risks. Occasionally we’re going to fail and you’ll get some holes blown in you.

Pirates don’t have resources to waste. You’re always operating on a thin margin, not in fat city.

We’re all banded together.