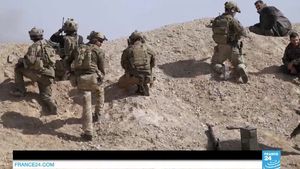 For two years the strategic town of Shaddadi, in northeastern Syria, was a stronghold of the Islamic State (IS) group jihadists. In February, 5,000 fighters from the Syrian Democratic Forces (SDF), a coalition of Kurdish and Arab militias, encircled the city and battled the terrorists for 10 days. It took fierce fighting, supported by air strikes from the US-led coalition, and was slow progress until finally the SDF retook Shaddadi on February 19, liberating its residents from the yoke of the jihadists.

Village by village, the SDF Coalition made up of Kurdish, Arab, Armenian, Assyrian, Chechen, Turkmen and Circassian fighters is determined to expand the territories it controls. A key ally of the West, its aim now is to influence Syria’s destiny.

FRANCE 24 reporters Romeo Langlois, Mayssa Awad and Mohammed Hassan were able to gain exclusive access to the fighters of this interethnic coalition that is taking on the IS group "caliphate". They witnessed firsthand the battle to take back the town of Shaddadi. This is their extraordinary 35-minute documentary. (France24)

This is the lead-in to a terrific documentary. It paints an informative view of current events in Rojava. I found the following points most interesting.

– The narrator describes the YPG as the Syrian branch of the PKK. Although that coincides with Erdogan’s position, I don’t buy it. Nor is that the position of the USG, much to the chagrin of Erdogan.

– There is an interview with Sheikh Hamidi, leader of the Shammar tribe in Syria. His tribal militia is part of the SDF. He says he sides with the Kurds as long as they don’t put the integrity of Syria at risk. Neither Hamidi or the Kurds have declared war on the Syrian government. He sees the IS as just the latest version of Wahabbism championed by the house of Saud which his tribe has fought since the 19th century. I find this a wonderful example of the continuity of culture and history.

– The most interesting part of this documentary is the filming of a group of Special Forces soldiers on the front lines during the assault on Shaddadi. The narrator mentions the presence of French, American and British advisors with the SDF forces. The soldiers in question definitely have the appearance of American Green Berets. As I suspected, they are not confined to coordination rooms behind the front. They are very much in the thick of it. Ah, to be young again.

Hanover (Germany) (AFP) – US President Barack Obama will on Monday announce plans to send up to 250 more military personnel to Syria, according to a senior administration official, intensifying US assistance to rebels as a ceasefire falters.

Obama "tomorrow will announce that he has authorized up to 250 additional forces deploying to Syria," the source said, adding that the president would confirm the deployment in a speech in the northern city of Hanover. US troops in Syria are mandated to advise and assist Syrian rebel and anti-Islamic State forces. (Yahoo)

The France24 documentary only shows ten or so Green Berets. And this small group of advisors led to a breathtakingly successful double envelopment battle. An additional 250 advisors will be a major investment in this front. I think this means there will soon be a serious SDF/YPG offensive towards Raqqa and Deir ez-Zor. This may be one of the reasons for the SAA offensive to relieve their defenders at Deir ez-Zor. Perhaps there will be a reenactment of the meeting on the Elbe between Russian and American troops, this time on the Euphrates between the SAA and the SDF/YPG. With that many advisors available, I hope there will also be a push towards Manbij and beyond from the Tishrin bridgehead.  That damned border needs to be closed one way or another. And Erdogan can pound sand up his fourth point of contact.

This entry was posted in Current Affairs, Syria, TTG. Bookmark the permalink.