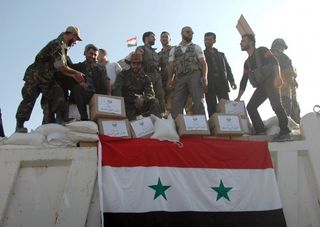 "Despite months of laboratory testing and scrutiny by top U.S. scientists, the Obama administration’s case for arming Syria’s rebels rests on unverifiable claims that the Syrian government used chemical weapons against its own people, according to diplomats and experts.
The United States, Britain and France have supplied the United Nations with a trove of evidence, including multiple blood, tissue and soil samples, that U.S. officials say proves that Syrian troops used the nerve agent sarin on the battlefield. But the nature of the physical evidence — as well as the secrecy over how it was collected and analyzed — has opened the administration to criticism by independent experts, who say there is no reliable way to assess its authenticity."  Washpost

Yup.  The mushroom shaped cloud is made up of Sarin this time.  pl