The “Death Ship” and Chaplain McDonnell 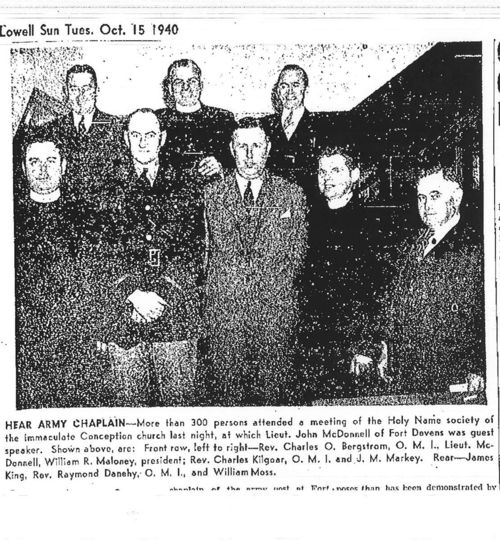 It is Pearl Harbor Day.  All too often remembrance is confined to the attack on Pearl Harbor.  That attack was immediately followed by a Japanese invasion of the Phillippine Islands, an American possession at that time.  After months of heroic but futile resistance US and Filipino forces surrendered to the Japanese Army.  There ensued three and a half years of unmitigated brutality and murder inflicted on American prisoners of war by Japanese soldiers.

One of  those POWs was Chaplain John McDonnell who was captured on the Bataan Peninsula, survived the Death March and years of abuse only to die on board the Enoura Maru, a Japanese merchant vessel en route to Japan.

Chaplain McDonnell baptised me in the post chapel at Fort Devens, Massachusetts in 1940.

SUPREME COMMANDER FOR
THE ALLIED POWERS

On 9 January in mid-morning, during the completion of the morning meal, anti-aircraft fire was heard on the Enoura Maru and all ships in the harbor. Soon the drone of planes was heard and almost simultaneously the whistle of bombs was heard. The Enoura Maru rocked violently from a near miss, causing a flail of bomb fragments and steel fragments from the sides of the ship which killed about 300 outright and injured a considerable number. After the bombing such first aid as could be rendered to men was made available by the Prisoner of War doctors and corpsmen aboard. This aid consisted of collecting dirtytowels, undershirts, or anything that could be used for bandages that the other prisoners would contribute. Outside of a few first aid kits which the doctors and corpsmen may have had, there were no medicines made available by the Japanese. In fact, no aid was rendered until 11 January when two Japanese enlisted hospital corpsmen announced they would treat those with minor injuries or wounds only. Treatment consisted of dabbing injuries with mercurochrome. The dead bodies in the holds were stacked in the center of the hatch area like stacks of cord wood. They remained there until the 12th of January. During this time, a majority of the men who were wounded and who soonthereafter died from those wounds could have been saved with proper medical attention, but with lack of bandages and medicines it was impossible for thedoctors to do much for them. Finally in mid-morning of 12 January, permission was granted to remove the dead bodies from the ship. The bodies were removed by placing them into cargo slings and lowering over the side of the ship into barges. Some of the dead were removed individually by tying ropes around the legs or arms and hauling them up onto the deck, then lowering them into the barges. The scene in the holds was like a page from Dante’s Inferno—dark, but one could see the wraithlike figures wandering dazedly through a maze of stacked corpses.

On 13 January, during the afternoon, orders came through from WADA that all the prisoners aboard the Enoura Maru would be transferred tothe Brazil Maru. Reasons for this change were that the Enoura Maru had been badly damaged during the bombing. Transfer to the Brazil Maru was affected by landing barges. The move was completed in late afternoon. The wounded men, fracture cases, etc., suffered great pain in transfer as in some cases they were lowered into boats by ropes and hoisted aboard ship in the same manner. At this time, there were approximately 900 men remaining alive out of the original group of 1619. The ship sailed from Takao on the 13th of January for Japan. The trip from Takao to Moji, Japan lasted from 13 January until 29 January. During the trip there were two issues of cooked rice a day. There were two or three men to a lightly packed canteen cup of rice. No soup was issued at all. This diet was augmented by whatever sugar the men could steal. Numerous protests to the prisoner commanders brought no results. A diagnosis for the cause of the high death rate aboard the Brazil Maru was due to a combination of malnutrition, dehydration and exposure. During the journey there was active trading for rings, watches and fountain pens between the prisoners and the Japanese guards and the ship’s crew for food, water and cigarettes. A lot of West Point and other graduation rings were traded for a cup of water or ten cigarettes. Anyone who had anything to trade did so. The water situation was very acute for the first two days out of Takao harbor. No liquids of any kind were issued. On the 15th approximately twice a day until the 29th, water was spooned out. It was black, salty and unpalatable. At no time even when the death rate was at its highest was the amount of water increased. Medical facilities aboard the ship were nil. Only the more seriously sick were placed under the hatch, which was considered as the hospital area. It was the coldest spot on the ship. Whenever a man was placed in sick bay it was almost a certainty that he would die. Only the men in the last stages were sent there. The doctor and medical corpsmen had nothing whatever to work with—no medicines, no bandages. It is said that one large bottle of sulfathiazol pills aboard the Brazil Maru probably would have saved at least 100 men whose diarrhea was a contributing cause to their death. When the ship first left Takao on the night of 13 January, about 15 men died. Bodies were stacked in the hospital area after first being stripped of all clothing by the hospital corpsmen under orders. Available clothing was then distributed to the men who most needed it. Bodies were collected over a two or three day period before permission was obtained from WADA to get a burial detail to throw them overboard. The first group of dead was about fifty. Generally, bodies would be taken up on deck and buried daily. It got progressively worse, finally reaching a maximum of about forty dead per day a few days prior to arrival in Japan. The men outside of the hospital area who had previously shown no evidence of suffering more than the rest would be found dead in the morning. This became so commonplace that a hospital corpsman would make a circuit of all bays each morning and shout “Roll out your dead.”Bay leaders would then check their bays. A Chaplain prisoner led the men in prayer every night until he died five days out of Takao. Another Chaplain gave all of his food and water to the sick until he too died. Another Chaplain who overtaxed his strength by helping the sick died. Two or three times a day the roll would be called and if a man’s name was called without an answer, someone would say “dead” or give the circumstances regarding his death, such as suffocation aboard the Oryoku Maru.Even though the list had been called many times previously, this was done byorder of the Japanese. The ship finally arrived in Moji, Japan on 29 January 1945. It was met by a large boarding party of officers, enlisted men and civilians. It was announced in mid-morning that clothing would be issued topside. There were about 450 men alive then. It was bitterly cold. The prisoners were issued a pair of wool trousers, a blouse, a suit of cotton underwear, but no socks. Shoes were captured British shoes and were issued without regard to size. This was the first time since 13 December that there was enough water available for each man to have as much as he wanted. However, the men were cautioned that the water might be contaminated and that they had better take it easy. Later on food was issued but many of the men were so sick they were unable to eat. When the men disembarked from the ship they were walking skeletons. The Japanese corpsmen seemed to have a look of astonishment on their faces and there were shocked expressions on the faces of the people at Moji as the prisoners were marched through the streets. Men shuffled, some walked with the support of others. The men were infested with lice and had not shaved since13 December. When the prisoners died aboard the Brazil Maru, they were stacked like cordwood. All of them presented a uniform appearance; lips were drawn back exposing teeth in a half snarl due to skin contraction, ribs seemed to be bursting out of the bodies and where the stomach would be was a hollow, legs and arms were pipe stems. A combination of cold and rigor mortis gave them a rigid unreal appearance. The eyes were sunken. Most of them were stripped nude and all of them gave a definite appearance of starvation ..

Some other links mentioning McDonnell's ordeal, concentrating
on his time in the Phillipines, but, again, not specifying cause of
death: "

This entry was posted in The Military Art. Bookmark the permalink.

29 Responses to The “Death Ship” and Chaplain McDonnell