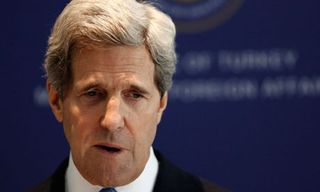 "You could call it the Hail Mary pass of diplomatic relations. In a desperate attempt to find some solution to the ongoing Syria crisis, now in its third year with no end in sight, Saudi Arabia’s intelligence chief Prince Bandar bin Sultan reportedly offered Russian President Vladimir Putin a multi-billion dollar arms deal to curb Moscow’s support for the Syrian regime of President Bashar Assad when they met in Moscow last week. The deal was rebuffed; on Friday the Kremlin responded to news accounts about the proposal with a terse rebuttal, telling Reuters that no deal had been discussed in detail. Earlier news accounts, including Reuters, quoted unnamed Arab and Western diplomats describing a deal in which Saudi Arabia would buy some $15 billion worth of Russian weapons in addition to offering assurances that Gulf countries wouldn’t threaten Russia’s dominance of the European gas market in exchange for a commitment that Moscow would not block future United Nations Security Council resolutions on Syria. The threat of a Russian veto has been the major obstacle to any UN actions in Syria."  Time

ROTFL.  The Russians are also saying that if there is a renewal of the Cold War it exists only in Obama's mind.  Perhaps at some point he may get the idea that he is not ruler of the world.  I suppose we played some foolish role in all this.  pl