The polls, all of them, were wrong – massively. Did you see the blowout in Florida? I'm sure we'll be hearing more about how Brenda Snipes (fired before she could resign in 2018 because of incompetence and fraud) would have run things differently than Peter Antonacci, who was appointed by then Governor Scott to the position.

Did you notice that Democratic governors with the harshest lockdowns locked down election counting as soon as it became apparent Trump had won their state? Michigan (Whitmer), Wisconsin (Evers), Pennsylvania (Wolf), and Virginia (Northam)?

The press coverage, well you know they are all in for Kamala. Pennsylvania, where Trump was up by almost 700,000 with 64% of the vote in and only the western parts – all pro Trump – remaining and…. let's put a 'Lid" on it? Do you wonder what they are doing in that basement? Just like Michigan, Trump  up by 300,000 with 65% of the vote in and….. you guessed it, let's stop counting. Especially since they all know now just how many junk-mail ballots they need to fill out and 'find' before they start counting again.

They do better in the third world. Operation Red Mirage, round two, happening now. 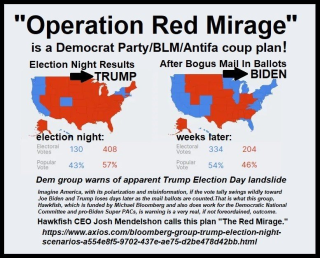 I know, its from a right winger. Only the CEO of Hawkfish is hardly that.

On a final note, check the Yuan to USD exchange rate. It was tanking in overnight trading, right up to the left calling a halt to the election. Now you have to wonder why it recovered in a matter of hours.

Now you will pardon me as I go check the trunk of my car to see if I can find a box of anything to turn in…..