[NOTE FROM PUBLIUS TACITUS–Here is the latest from Dr. Postol. He correctly notes the discrepancy between the White House account of what happened at Khan Sheikhoun and that now offered by the Government of France. The key point is this–both the United States and the French are lying about what actually happened. The Government of Syria did not use a chemical weapon on April 4.]

Attached below are data derived from the French Intelligence Report published yesterday on April 26, 2017. A reading of the report instantaneously indicates that the French Intelligence Report of April 26, 2017 directly contradicts the White House Intelligence Report of April 11, 2017. The discrepancies between these two reports essentially result in two completely different narratives alleging nerve agent attacks in Syria on April 11, 2017. The fact that these two intelligence reports allege totally different circumstances associated with the same alleged event raises very serious questions that need to be investigated and reported to the American public.

The White House Intelligence Report (WHR) of April 11 alleged that a crater in the Northeast corner of Khan Sheikhoun was the source of a sarin release that killed and injured a significant number of people. The WHR cited publicly available evidence showing the crater where the alleged sarin release occurred and the areas adjacent to it. Inspection of the crater shown on video cited by the WHR showed that there was no evidence to show that the crater had been created by an airdropped chemical dispersal munition. Also of concern is that none of the local Syrian journalistic reports from that location showed the populated area that was immediately (within tens of meters) downwind of the alleged aerosol dispersal that would have been filled with nerve agent casualties. Instead, the local Syrian journalists walked in the opposite direction from the alleged aerosol dispersal plume to show a dead goat that was well up wind of the alleged dispersal.

The French Report instead claims that there were at least three munitions dropped from helicopters in the town of Saraqib, more than 30 miles north of the alleged sarin release crater identified by the WHR.

The WHR claims that a fixed wing aircraft was the originator of the airdropped munition at the alleged dispersal site. The French Intelligence Report alleges that a helicopter was used to drop sarin loaded grenades at three different locations in Saraqib.

Both reports cannot simultaneously be true.

The French Report essentially refutes the claims in the White House Intelligence Report of April 11, 2017. This is yet another indication that there are fundamental problems with the claims made by the White House that were used to justify the April 7, 2017 military strike in Syria. It also raises questions about statements praising the accuracy of the WHR by the National Security Advisor, H. R. McMaster, and the Secretary of Defense, James Mattis. Both claimed very high confidence in the quality and accuracy of the intelligence from the WHR.

The French Intelligence Report can be found at http://www.diplomatie.gouv.fr/en/countryfiles/syria/events/article/chemical-attack-in-syria-national-evaluation-presented-by-jean-marc-ayrault on a webpage titled French Diplomacy (France Diplomatie). The description of the intelligence report and its appendix is under the subject heading Chemical Attack in Syria – National Evaluation presented by Jean-Marc Ayrault following the Defense Council Meeting (26 April 2017)

In addition, the appendix of the French Report lists the nerve agent attack of August 21, 2013 as proven to have been perpetrated by the Syrian government. Yet an article published in The Atlantic in April 2016 authored by Jeffrey Goldberg reported that President Obama said that he was told by James Clapper, the then Director of National Intelligence, that it was not a “slamdunk” that the Syrian government was the perpetrator of the attack in Damascus on August 21, 2013.

Map Showing the Contradictory Narratives in the White House and French Intelligence Reports about Alleged Sarin Attack in Idlib on April 4, 2017 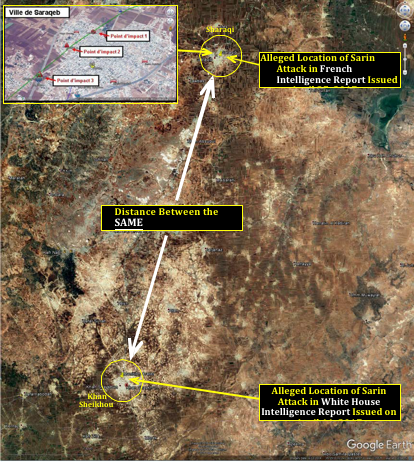 Map Constructed from WHR and the contradicting French Report and Appendix at the Following URL http://www.diplomatie.gouv.fr/en/country-files/syria/events/article/chemical-attack-in-syria-nationalevaluation-presented-by-jean-marc-ayrault 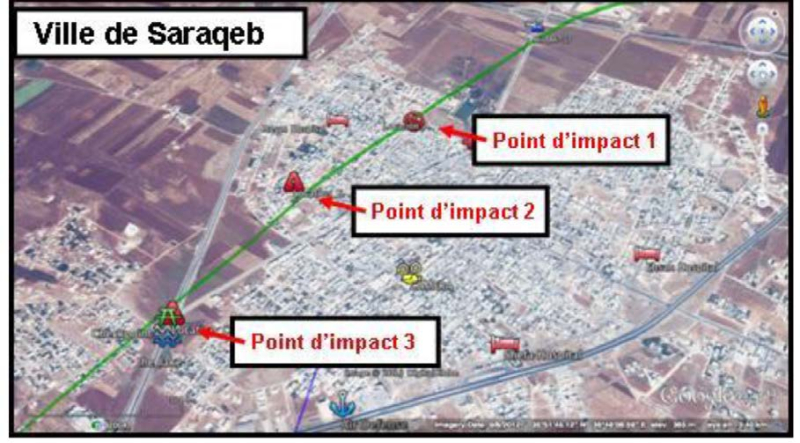 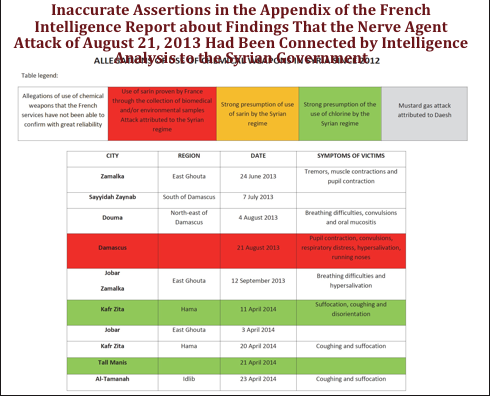 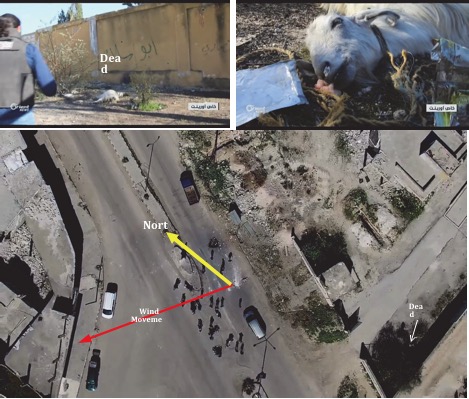 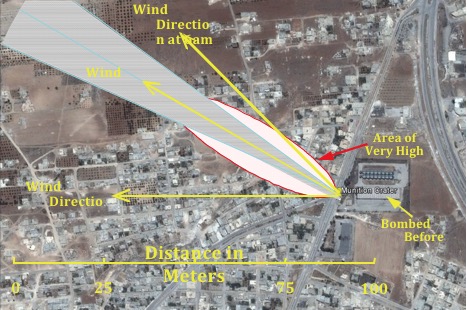 This entry was posted in As The Borg Turns, Syria. Bookmark the permalink.