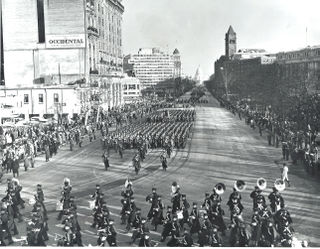 The VMI Cadet Corps is in the middle ground of this Washington Post photograph, first the staff and then the two battalions with the color party between.

It snowed the day before.  There was sleet in the night, and then the parade.  The parade began in 3rd St. SE near the capitol.  The route of march passed the equestrian statue of Grant, the one in which he is hunched over against the rain in the Wilderness.  Then we came down Pennsylvania Avenue to this point.  There were three inches of icy, salty, slush in the street.  You can see a bare patch of pavement just in front of the regimental staff.  The band in the foreground did not belong to us.

The street has changed.  The "Occidental" restaurant still exists but it inhabits quarters on the lower floors of a large office building on the same site.  Down the street there are a few familiar landmarks like the spire of the old Post Office and the capitol itself but nearly everything else is gone including the trolley car tracks.

We turned right here into 15th Street and then, a block later left again into Pennsylvania Avenue.  The big reviewing stand was there in front of the White House.  At "Eyes Left" all you could see was Jack Kennedy standing with his hat held over his heart.  His beautiful wife was at his side.

We "fell out" at Washington Circle in the George Washington University campus half a mile away.

The buses waited there for the three hour trip back to school.

The VMI Corps will be in this inaugural parade.  pl