The “Mushroom Shaped Cloud” is called Sarin this time 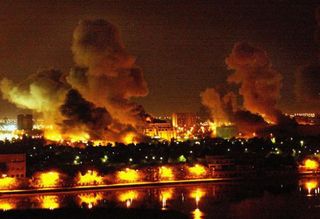 "The White House acknowledged Thursday the Syrian government has used chemical weapons, including the nerve agent sarin, on a small scale a number of times, according to a statement.
The administration also indicated it will increase the "scope and scale of assistance" to rebels in Syria following its acknowledgment that the Bashar al-Assad government has used chemical weapons in the civil war, according to the statement.
"  CNN

Ho hum.  I guess this means that the warhawks have won the argument inside the BHO Administration.

I thought it would take longer for the influence of Susan Rice and Samantha Power to take effect, and then, there is the pitiful spectacle of John McCain.  pl