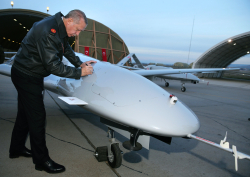 Back in early 1981, I did a few “odd jobs” between graduating from the Infantry Officer Advanced Course and starting the SF Officers Course. One of these jobs was as an ARTEP evaluator for a mech infantry company on Fort Benning. While I had plenty of book learning about tank-mech infantry teams, I was much more comfortable following a dismounted night attack through a cold January swamp. There was no Moon and a stiff, steady breeze so I felt we were making a stealthy approach. Although the attack was well executed, I learned something disconcerting during the after action review. Our night approach through the swamp was monitored by a high flying AC-130 gunship from 1st SOW. The gunship caught the heat signature of each approaching soldier as they silently slid through that moonless swamp. The lesson I took was that the idea of remaining undetected in uninhabited forests and mountains was a myth. Combine that with the Fort Benning aphorism, “If you can be seen, you can be killed” and I quickly became enamored with the concept of urban guerrilla warfare once I reached 10th Group. We would survive behind the Iron Curtain only by hiding among those we were to liberate from oppression.

So what does this stroll down memory lane have to do with the new drone wars? A lot, actually. It’s the same principle. Armies can be seen and killed from above by a wide range of drones in 2020 just as we could be seen and killed by the AC-130 back in 1980. The difference lies in the proliferation of these drones and the fact that they are less expensive than manned aircraft. They also don’t expose pilots or operators to death or capture.

First there were our Predators and Reapers hunting down jihadis and the occasional wedding party. We have well over 500 of these heavy drones. We have even more smaller drones down to man packed, hand launched tactical varieties. But we are not alone anymore. China is producing them like gangbusters. Turkey has emerged as a major leader in the development and employment of drones. One of these, the Bayratkar T2B, has had success in Syria, Libya and Azerbaijan. Erdogan has also deployed the T2B against the PKK within Turkey and northern Iraq.

The T2B is a medium altitude tactical drone. It has a range of more than 150 km and can fly at a maximum altitude of 22,500 feet. It has a maximum speed of 120 knots, a cruise speed of 70 knots and endurance of more than 24 hours. The T2B is powered with a 100 horsepower Rotax civil engine, an engine common to ultralight and homebuilt aircraft. The unit cost of the aircraft itself is less than 100 thousand dollars. Its electro-optical reconnaissance, surveillance and targeting system is now produced by Aselan in Turkey at a cost of 400 thousand dollars per unit. Although it does use GPS, it is not satellite controlled. Ground stations control the T2B by line-of-sight radio signal. The munitions, also produced in Turkey by Roketsan, are laser-guided, precision, long range and light weight. They include thermobaric and tandem warheads effective against reactive armor. Overall, the T2B is an impressive piece of kit.

As I mentioned, the PKK were the first to feel the wrath of the T2B. Those fighters hiding in the hills and mountains of eastern Turkey and northern Iraq have been getting clobbered since the droness were employed against them. I’m sure they learned the same lesson I learned forty years ago in that Fort Benning swamp. The difference is that my lesson was academic, the PKK’s lesson was catastrophically lethal. Erdogan also used the T2B and other drones against the YPG/SDF over the last few years.

The first time the T2B gained notoriety in the West was when they were used as part of Turkey’s Spring 2020 counterattack against the very successful R+5 Idlib Dawn offensive. A large number of T2Bs, along with a smaller number of the larger, satellite-controlled Anka medium drones were deployed from 1 to 5 March. At a loss of six drones, Turkey claimed it destroyed over a hundred SAA armored vehicles, dozens of artillery systems and hundreds of SAA troops. Take that claim with a grain of salt, but Russia and the SAA agreed to a ceasefire immediately after that.

Turkish drones also played a significant role, along with the imported Syrian jihadis, in stopping Haftar’s LNA from taking Tripoli in early 2020. Until that time Haftar was using Chinese made Wing Loong drones to great effect. The GNA compensated for the shorter range of the newly arrived T2Bs by establishing radio relay sites to extend their operational range. The T2Bs used a Turkish EW suite to jam the Russian made Pantsir-1 units and took them out systematically. They then played havoc among Haftar's forces deployed in the flatness of northern Libya. Haftar and the Wagner Group were forced to withdraw from the outskirts of Tripoli.

The proliferation of attack drones, especially Turkish drones, is changing ground warfare. In Syria, Russia rushed additional air defense capabilities to SAA front line units to blunt the threat of Turkish drones. Movement, dispersion and concealment methods required modification. A hull down position for an AFV is nothing to a drone. After the March 2020 drone attacks in Idlib, the Russians sent wreckage of those Turkish drones back to Moscow to develop an effective countermeasure. They have now rushed the KRET Krasukha electronic jamming system to their base in Armenia where the system reportedly caused nine drones to loose connection with their control stations and crash. The Krashukha also blocks GPS signals to prevent drones from automatically returning to base. The T2B doesn’t appear to have that feature, but many drones do. In my opinion, this is the most promising countermeasure to the widespread use of drones. The Russian military, due to their massive investment in radio-electronic combat (REC) is in the best position to pursue this countermeasure. We could someday soon see serious deployment of REC at the company and battalion level. Sure we can change our TTPs (tactics, techniques and procedures) to reduce our vulnerabilities to the threat of constant areal surveillance and attack, but that would be debilitating to normal operations. We best get to stepping in developing and widely deploying an effective EW capability. China is right up there with Turkey and the US in the development of drone warfare.

This entry was posted in TTG, Turkey, weapons. Bookmark the permalink.