The Other 13th Amendment – TTG 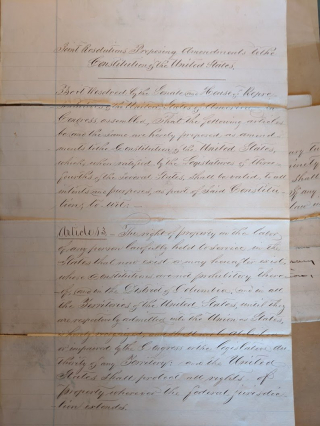 I ran across this series of twitter postings by Susan Simpson, a DC lawyer. She discovered some surprising (at least to me) antebellum congressional documents at the Federal Archives showing how far politicians were willing to go in appeasing the southern states in order to preserve the Union. If those hotheads in Charleston could have controlled their emotions for just a little longer, our Constitution could have been far different than it is today… at least for many decades.

Given this discovery, the articles of secession of most of the Confederate states, and Stephens’ Cornerstone Address, I am more convinced than ever that preserving the institution of slavery was central to the Confederate cause and abolition was not at all a serious consideration for the Union cause. I don't think proponents of either side wanted these documents to see the light of day again.

In honor of Juneteenth, a brief story about the America that almost was. I was at the Federal Archives once, searching for a very different document, when I came across a stack of papers titled "Joint Resolutions Proposing Amendments to the Constitution of the United States." The words "Article 13" were underlined on the page below.

"Oh wow," I thought. "An original draft resolution for the 13th Amendment." I was kind of surprised they had just left it lying around with a bunch of totally unrelated documents. Then I kept reading. "Article 13. The right of property in the labor of any person lawfully held to service in the States [ ], … shall not be abolished or impaired by Congress[ ]; and the United States shall protect all rights of property wherever federal jurisdiction extends."

It was the original 13th Amendment, introduced in January of 1861.

A version of it was passed by both the House and Senate by a two-thirds vote. It was signed by President Buchanan, and the states began to ratify it. Then it stalled out, due to the whole Civil War thing.

The amendments that almost were did not get better from there.

The 14th Amendment: "The power to regulate commerce … shall not be construed to authorize Congress to make any law impairing the right of the Master to remove from one State to another persons held to service[.]"

Congress drafted these amendments in order to preserve what they believed were important Constitutional rights — through these amendments, they would ensure that Americans "shall not be deprived of the right of property in the service or labor of any person."

The would-be 16th Amendment would have imposed harsh penalties on any state interfering with slavery: "If any state shall enact … any law impairing [the Fugitive Slave Act] such state shall not be entitled to any representation in Congress [ ] until the the repeal of such law."

And then there's the would-be 17th Amendment, in which the Senate would be divided into two classes — the slave-state class and the non-slave-state class — and "a majority of the vote of each class shall be necessary to the passage of the presiding motion, bill or resolutions."

And to ensure the slavery question would be forever settled, one last amendment was needed. The 18th Amendment: "The provisions of … the several amendments to this Constitution, numbered Articles 13, 14, 15, 16, and 17, shall forever be unalterable."

To the proponents of these amendments, what they sought was no more than the preservation of the Union as it had always been, and had always been intended to be: "We ask nothing but that which is in the Constitution itself. The Constitution recognizes slaves as property." The idea that "all men are created equal" had literally meant *all* men was "too absurd to talk about. The men of the Revolution were white men… It was all they meant; it was all they intended; it was all that was understood by any man then living to have been intended by it."

As Senator Wigfall, TX, noted: "What is the fact as to Massachusetts? Why, on the 18th of July, 1776, they published the Declaration of Independence in the Boston Gazette; and, before God, they published an advertisement for a runaway negro, and offered another for sale. [Laughter]"

In the end, these six proposed amendments would not pass in their entirety, because the Northern states could not accept the parts that expanded slavery to new states – thereby upsetting the balance of power with the South. But the other parts, the North was willing to accept.   (@TheViewFromLL2)

This entry was posted in History, TTG, WBS. Bookmark the permalink.

50 Responses to The Other 13th Amendment – TTG