The Real DNC Hack, Deja Vu All Over Again by Larry C Johnson

What will be the best metaphor for the Democrat Party in the 2020 Presidential campaign? The explosion and crash of the Hinderburg? The Titanic being ripped open by an iceberg? The Nazi’s futile stand at Stalingrad? All are apt and relevant in my mind.

Despite more than three years of persistent propaganda by the Democrats trying to portray Donald Trump as a puppet of Russia’s Vladimir Putin, Trump has become more popular and managed to deliver on a raft of campaign promises that many doubted would ever be fulfilled. Incomes are up across the board, minority unemployment has fallen to historic, unprecedented lows, the life span of Americans is increasing, deaths from opiod overdoses are down and the flow of illegal immigrants is being staunched.

All of this noise by the Democrats and obsession on trashing Trump has prevented the media from taking a serious look at the release of purloined DNC emails on the eve of the 2016 Democrat Convention. That incident almost always is characterized as evidence of Russian interference. But that was not true. The emails apparently were taken by DNC employee Seth Rich and sold to Wikileaks.

The real truth that has been ignored is how the DNC establishment tried to cook the nomination process in the favor of Hillary Clinton and, at the same time, sabotage Socialist Bernie Sanders.

Well, it is deja vu all over again. Only this time the DNC establishment does not have a consensus choice like the shrill Hillary to rally around. The field of Democrat candidates is a mess. Democrats stupidly went all in on the impeachment effort and, in the process, prevented the usual scrutiny and media focus that would cull the herd of lame Democrats. Not a single Democrat candidate in the running is capable of matching the charisma and entertainment powers of Donald Trump. Hyper partisan anti-Trumpers who deny this fact are like Titanic passenger sitting in the poker lounge dealing cards while the ship is taking on water and insisting the ship can’t sink. Wrong.

Having learned nothing from 2016, the DNC establishment is once again trying to sabotage and undermine Bernie Sanders. They are correct that a Bernie candidacy at the top of a Democrat ticket is a guaranteed disaster for the party come November 2020. But it also is true that Sanders’ supporters are rabid fans and will fight to the death for their candidate. While they were shutout for the most part from the 2016 Convention, that is not likely to happen this go round.

The rise of Bernie Sanders marks the shattering of the Democrat consensus ushered in by the Presidency of Bill Clinton. He is not a Democrat. He is a Socialist and has almost 60 years of quotes and actions that have not been scrutinized by the media nor the public. Imagine seeing the 37 year old Bernie praising the Ayatollah Khomeni and condemning Jimmy Carter and the U.S. hostages held by Iranian radicals in the takeover of our Embassy in Tehran. Yeah, that’s a real winner on the campaign trail.

There is not a single Democrat running now with the aspirational messages and themes that marked the campaigns of Bill Clinton and Barack Obama. They eschewed fear and negativity. They embraced hope and optimism. Each dead a version of making America great.

The current crowd of ideological dwarfs infesting the Democrat Presidential field cannot even acknowledge the remarkable, unprecedented performance of the economy under Donald Trump. His fight to secure a new trade agreement with China and with Canada and Mexico, resonates with the blue collar workers that once were considered the foundation of the Democrat Party. Not any more. Those voters are saying adios to the Dems and flocking to Trump.

The Democrats are a cross between a freak show and a clown car. They eagerly embrace murdering unborn children, protecting illegal immigrants, denying inner city black parents the right to choose decent schools for their kids, demanding protections for transgender crazies and disarming law abiding Americans. Those are not messages that reverberate among the working class and those striving to give their kids a better life. Where is the hope.

What is certain is that the Democrats have boarded the train that is going to run off a cliff down the road. And that road is getting shorter everyday. Look for the Democrat establishment to rally around Amy Klobuchar in a bid to stymie the surge to Bernie Sanders. I do not think it will work, but the establishment is going to fight like hell and use every scheme and cheat available to stop Sanders. 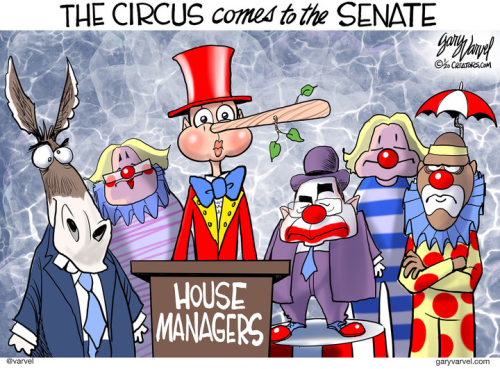 32 Responses to The Real DNC Hack, Deja Vu All Over Again by Larry C Johnson