The Shoot Down of the Russian IL-20: Who’s Responsible? 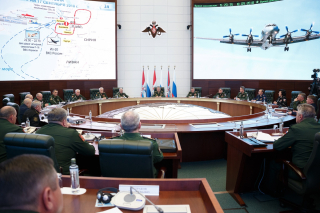 All of the facts have yet to be known but the Russian Defense Ministry has little doubt: the Israelis created the conditions by which Syrian air defenses took down a Russian Il-20 electronic intelligence aircraft in the midst of an Israeli air strike on a Syrian Arab Army facility in Latakia between 10 PM and 11 PM local time Monday night.

Russian Defense Ministry spokesman Igor Konashenkov told reporters, this morning, that four Israeli F-16's used the Il-20 as cover to protect themselves from Syrian air defenses. "By using the Russian plane as a cover the Israeli air pilots made it vulnerable to Syrian air defense fire. As a result, the Ilyushin-20, its reflective surface being far greater than that of F-16, was downed by a missile launched with the S-200 system," Konashenkov said. The Israeli planes deliberately created a dangerous situation for surface ships and aircraft in that area, he stated. "The bombing raid was near the French frigate The Auvergne and in close proximity to the Ilyushin-20 plane of Russia's Aerospace Force that was about to land," Konashenkov said. The Russians had initially said that they had detected missiles fired from the Auvergne, but by daybreak had stopped saying that, and the French have denied involvement.

After Konashenkov's press briefing Russian Defense Minister Sergei Shoigu issued a very strong statement vowing a Russian response. "We have informed today our Israeli colleagues, and I have also informed personally the Israeli Defense Minister [Avigdor Lieberman], that such actions will not be left unanswered by us," Shoigu said. "Our reconnaissance airplane Il-20 with 15 crew members on board" which had been collecting intelligence on jihadi drone operations in Idlib, "was in the strike zone, strictly speaking between Israel’s aircraft – four F-16 planes – and Syrian territory," he said. "The Israeli side didn’t issue a notification or, to be more precise, they warned us a minute before conducting the strike," he said. "They told us they were about to attack facilities on the Syrian territory, and they did it." Putin later said during a joint press conference with the prime minister of Hungary that he signed off on Shoigu's statement. “No doubt we should seriously look into this,” he said.

The IDF then took the unusual step of issuing a statement, at mid-day, admitting that they were responsible for the air strike and expressing sorrow for the loss of the 15 crew members aboard the Il-20. However, they blamed Damascus, Hezbollah and Iran for the shoot down, reports the Times of Israel. According to the IDF, the target of the Monday night strike was a Syrian military facility that manufactured "accurate and lethal weapons," which were "about to be transferred, on behalf of Iran, to Hezbollah in Lebanon." The military said its initial investigation found that "the Syrian anti-air batteries fired indiscriminately and, from what we understand, did not bother to ensure that no Russian planes were in the air." the Russians will know whether or not any of this is true by their own radar data and their close working relationship with the Syrian air defense units.

In any case, it doesn't appear that Vladimir Putin was convinced b y the Israeli explanation though he did make a point, during his press conference, of differentiating this incident from the shoot down of a Russian Su-24 bomber by Turkish F-16's in November of 2016. According to the Kremlin readout of a phone conversation that Putin had with Netanyahu the Israeli prime minister promised to provide detailed information on the activities of the Israeli Air Force over Syrian territory on that day, which will be delivered soon to Moscow by the Israeli Air Force commander. Putin, in turn, "noted that operations of this nature by the Israeli Air Force are in violation of Syria's sovereignty. In this particular case, Russian-Israeli agreements on preventing dangerous incidents had not been observed either, and that resulted in the Russian aircraft coming under Syrian air defence fire. The Russian President called on the Israeli side to prevent such incidents in the future."

Israeli commentary on this incident takes note that the deaths of Russian service members in the context of an Israeli attack on the Syrian military has jacked up tensions between Tel Aviv and Moscow. "Israel has warned that Iranian forces must leave Syria. At the same time Jerusalem has good relations with Russia and Moscow has indicated it respects Israel’s concerns about Iranian involvement in Syria," wrote Seth Frantzman at the conclusion of a conclusion in the Jerusalem Post. "This delicate balance now is at risk of changing after Latakia. The death of Russian servicemen cannot be ignored by Moscow and Russia shows that it doesn’t want to accept that this was a terrible mistake, but rather seeing the airstrikes as endangering Russian lives." Avi Issacharoff, writing in the Times of Israel, also notes that the Israeli strike occurred in an area that had more or less heretofore off limits to the Israeli military, primarily because of the large presence of the Russian military in the area. Russia's Hmeimim air base lies only 18 km to the south of Latakia city. Russia's Tartous naval base is further down the coast, about 65 km, but the Russian navy also uses the port of Latakia as a secondary base. Israeli air strikes in this area clearly increase the risk to Russian service members deployed to these locations and this is not tolerable to the Russians.

This entry was posted in Israel, Russia, Syria, Willy B. Bookmark the permalink.