“The Spook Who Sat By The Door” – TTG 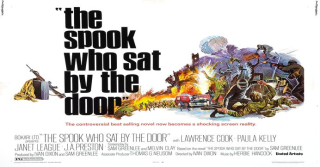 Earlier today one of our fellow correspondents, longarch, offered a link to an article on theorganicprepper.com that contends the current unrest is unfolding, step by step, in accordance with a playbook… the US Special Forces Unconventional Warfare Manual. This article by the organic prepper herself, Daisy Luther, asks the question, “who is behind this?” That’s a question deserving a whole discussion by itself. I offer only one comment about that right now. If you think all that’s going on right now requires massive funding and coordination, you’re out of your freakin’ mind.

That article did remind me of a long ago incident. Back when SWMBO and I were young college students, one of the first movies I took her to see was “The Spook Who Sat By the Door” in late 1973 at a theater in downtown Troy, NY. By that time I had my airborne wings, having attended jump school at Fort Benning the previous Summer, and I began developing a friendship with Master Sergeant Albert H. Rivers, a Green Beret with three tours in Viet Nam and Thailand newly assigned to our ROTC element. I chose this movie because of my growing interest in guerilla warfare. Obviously, I was and remain romantically challenged. SWMBO remembers it as the time we were the only two white people in the theater.

This movie freaked out the FBI. Theater owners who showed the film were visited by local FBI agents. The film’s distributors were visited by the FBI. Copies of the film were confiscated. It was disappeared. Bootleg copies were still available, but it wasn’t until Tim Reid (yes, WKRP in Cincinnati’s own Venus Flytrap) discovered a negative copy of the film in 2004 that it became widely available again. The FBI missed that one. The film has the feel of those blaxploitation films of the 70s, but it’s much more than that. I implore everyone watch the trailer of “The Spook” and imagine if Spike Lee did a remake of this today. The full film is also available on YouTube if you’re interested. If nothing else, you can see what a failure I was as a suave romantic.

“We believe we can end police brutality in our Black community by organizing Black self-defense groups that are dedicated to defending our Black community from racist police oppression and brutality. The Second Amendment of the Constitution of the United States gives us the right to bear arms. We therefore believe that all Black people should arm themselves for self-defense.”

I guess that’s one solution. Imagine if all those witnesses with smart phones when George Floyd was being murdered also carried weapons. Maybe the cops would have backed down. Most likely there would have been a lot of dead cops and civilians and we would still be in the middle of a nationwide uprising. Americans have not demonstrated the self-discipline or fire discipline to have everyone packing a roscoe. It’s a bad idea, especially now that so many of our cops have their asses pumped up with the “warrior ethic.” We may need cops to be those rough men to allow us sleep at night, but if they can’t turn off that rough man, they should not be cop or we will end up in a widespread guerrilla war.

https://www.youtube.com/watch?v=s59OaRxN_40  (a decent copy of the film preceded by a half hour of commentary)

UPDATE: Here's a version of the film with a better audio track. Thanks to Enrico Malatesta for providing this version.

This entry was posted in Current Affairs, Film, History, TTG. Bookmark the permalink.