How Can Susan Rice Know What Obama and Comey Said if She Was Not Present? by Larry C Johnson

Here is the bottomline in a nutshell–Susan Rice has been caught red handed trying to construct a lie about what Barack Obama knew and did not know with respect to General Michael Flynn. She claimed to be present when Barack Obama discussed the Michael Flynn intercept but, according to Sally Yates, who was interviewed by the FBI, only Yates, Jim Comey and Barack Obama were present. This new revelation–made possible by the declassification of the Susan Rice email written in the last moments of the Obama Administration–actually bolsters Michael Flynn’s contention that he was the victim of a political hit job designed to take out Donald Trump.

Let me remind you of the essential facts that you must have in mind in order to understand Rice’s clumsy attempt to fabricate an excuse for Obama’s inexcusable spying on Donald Trump, his family and his team.

Please take a close look at Sally Yates’ account to the January 5, 2017 meeting: 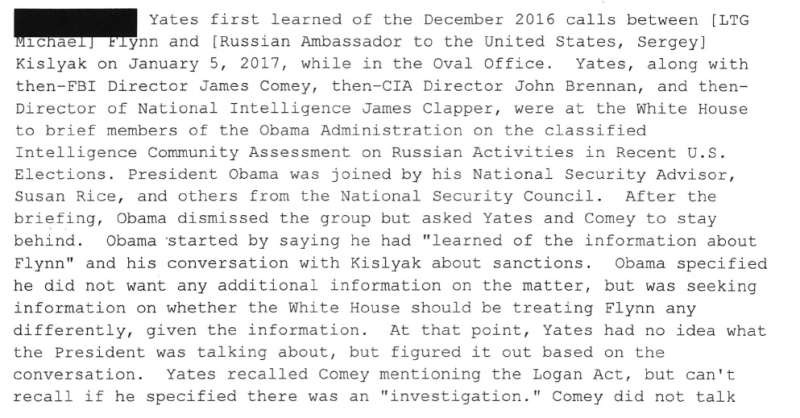 According to Sally Yates, OBAMA DISMISSED THE GROUP (i.e., Susan Rice, Jim Clapper, John Brennan and “others” from the National Security Council) and asked Yates and FBI Director Jim Comey to “stay behind.” It was Obama who brought up Michael Flynn’s conversation with the Russian Ambassador and specifically identified “SANCTIONS” as the substance of that conversation.

Obama then said, according to Yates, that he did not want any additional information on the matter, but was seeking information on whether the Obama White House should be treating Flynn differently going forward.

Now we have the Susan Rice account of this meeting and it differs markedly from Yates. How could Susan Rice know what was said in the January 5th meeting? She wrote this email 15 days after the meeting the email is supposed to record and, according to Yates, was not present.

Let me point you to the salient points. According to the first paragraph, Susan Rice and Sleepy Joe Biden were present for the “follow on” conversation Barack Obama had with Sally Yates and Jim Comey. Sally Yates said nothing about Joe Biden and she was very clear that everyone but her and Comey left the office.

Rice then wants us to know that Obama kicked off the conversation by insisting that he was not “asking about, initiating or instructing anything from a law enforcement perspective”.

Obama’s next move, according to Rice’s fabricated account, directs the staff to “ascertain” if there is any reason the Obama team cannot fully share intelligence relative to  Russia.

Rice then hangs the saddle on Jim Comey’s back. Comey affirms he’s doing everything by the book (except we now know he overruled the FBI agent recommending closing the case on Michael Flynn). It was Comey, according to Rice, not Obama who raised the specter of Michael Flynn chatting up the Russians. Comey could not point to any specific violation of classified information by Flynn, but commented that the level of communication is “unusual.” 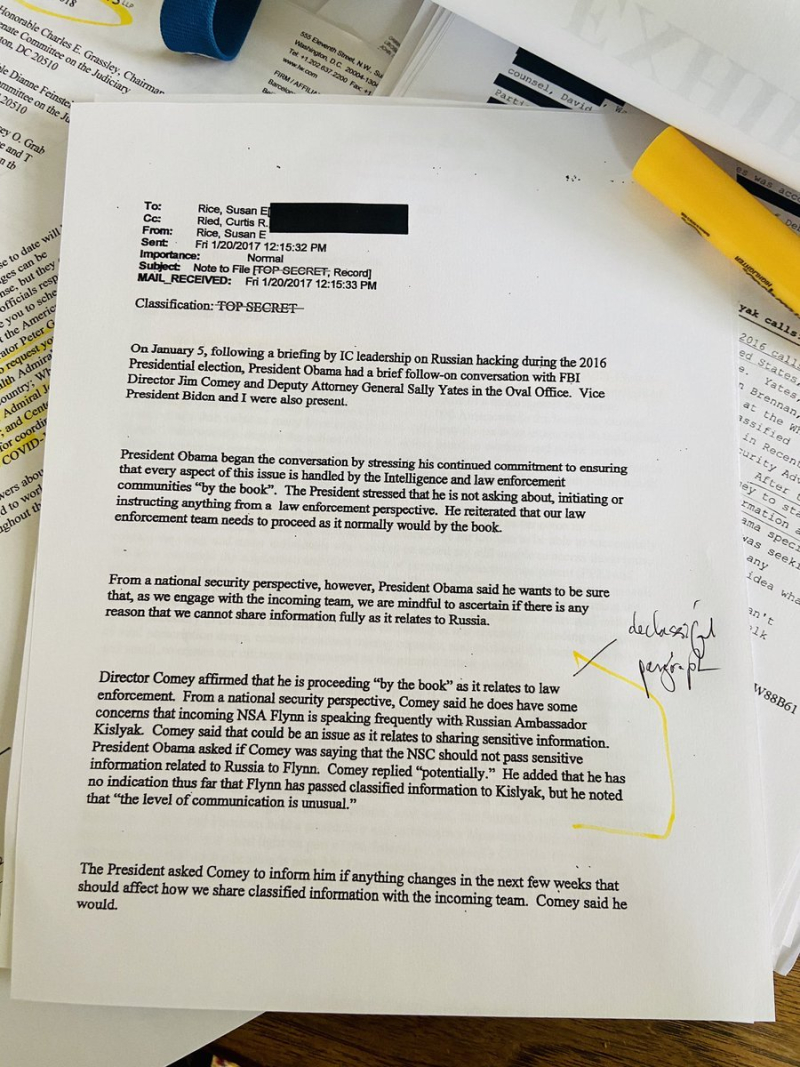 This is nothing more than a lame, stupid attempt on the part of Susan Rice to create some plausible deniability for Barack Obama. She placed herself in a meeting that, according to Sally Yates, was limited to Obama, Comey and Yates. Rice puts the blame on Comey for talking about the Russians. The Sally Yates account told to FBI under the penalty of lying to the FBI, was quite clear that Obama initiated the discussion of Russia, Flynn and the sanctions.

Someone is lying. Susan Rice is a demonstrated liar and was not under oath when she wrote up her fabricated version of the 5 January meeting. Sally Yates, however, would face legal peril if she lied to the FBI agents who interviewed her. I believer Sally Yates provided the truthful account of what actually happened after Barack Obama asked everyone but Yates and Comey to leave the room.

All of these people need to be under oath.

I think this is just one more piece of ammunition that Sidney Powell can load into her legal sniper rifle. She kicked the legal drama kicked up a notch today by filing a Writ of Mandamus. Here’s the legal definition of this term:

A writ of mandamus is an order from a court to an inferior government official ordering the government official to properly fulfill their official duties or correct an abuse of discretion. According to the U.S. Attorney Office, “Mandamus is an extraordinary remedy, which should only be used in exceptional circumstances of peculiar emergency or public importance.”

In the federal courts, these orders most frequently appear when a party to a suit wants to appeal a judge’s decision but is blocked by rules against interlocutory appeals. Instead of appealing directly, the party simply sues the judge, seeking a mandamus compelling the judge to correct his earlier mistake. Generally, this type of indirect appeal is only available if the party has no alternative means of seeking review.

Simply put–General Flynn’s attorney is asking a Superior Court to order Judge Sullivan to stop acting like a partisan hack and accept the mutual agreement of the Department of Justice and Michael Flynn’s attorney to dismiss charges.

8 Responses to How Can Susan Rice Know What Obama and Comey Said if She Was Not Present? by Larry C Johnson