The tanks will be rolling in a matter of days – TTG 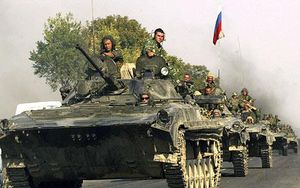 RT reported Putin has asked the upper house of parliament for authority to use the armed forces to stabilize the situation in Ukraine. The request is for the entire Ukraine, not just Crimea. The Federation Council opened the parlimentary session to the Russian national anthem just hours ago. The session was televised live on RT with several speeches and a unanimous vote to support the decision. One senator suggested recalling the Russian ambassador in Washington in response to the inflammatory speech given by Obama yesterday. History in the making.

Sergei Aksenov, the new Crimean prime minister asked Putin for military assistance after revealing armed thugs from Kiev attempted to take over several Crimean state buildings last night. Local citizen self defense squads repelled the attacks. He placed all Ukrainian armed forces and police in Crimea under his personal command. This is after the events of two nights ago when unidentified, incredibly disciplined forces appeared at Simferopol apparently thwarting the arrival of Tartar "jihadists" and weapons from Turkey. This incident is well reported by the Saker and Moon of Alabama.

Klitschko in Kiev just called for Ukrainian mobilization to face an imminent Russian invasion. Do the upstarts in Kiev have any control over the Ukrainian armed forces? RT just reported a Ukrainian naval vessel steaming in the Black Sea lowered the Ukrainian flag, raised the Russian flag and headed for Sevastopol. Surely Russian officers have been talking with their Ukrainian counterparts to gauge their loyalty. Undoubtedly some of these Ukrainian forces will greet the Russian columns as liberators and assist in controlling airfields and maintaining order. GRU Spetznaz teams have undoubtedly been monitoring Ukrainian forces and are prepared to act at the right moment. They will certainly target the Maidan neonazi hooligans and their Western supporters with cold, lethal precision. The SVR is collecting most, if not all, activist communications to aid the impending military operations and to further expose the mounting evidence of Western perfidy.  Long range reconnaissance troops will soon be clearing routes into the Ukrainian heartland. Any of us who trained to face the Soviet 3rd Shock Army across the Fulda Gap knows this was standard procedure decades ago.

Yes, the tanks will be rolling in a matter of days. Once they cross the border, I doubt they will stop until they are in Kiev and at the Polish border.

This entry was posted in Current Affairs, Russia, The Military Art, TTG. Bookmark the permalink.