“The World Turned Upside Down” – TTG 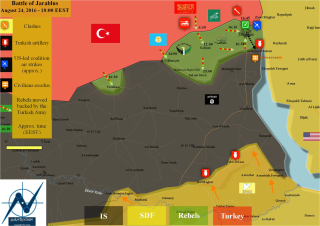 ISTANBUL — Syrian rebels backed by Turkish troops and tanks recaptured the Islamic State’s last major stronghold on the Syrian-Turkish border on Wednesday, inflicting yet another defeat on the militants rapidly dwindling “caliphate.” By late afternoon, rebel fighters and Turkish officials said the rebels had reached the center of Jarabulus after encountering almost no resistance from Islamic State fighters, who appeared to have fled ahead of the advancing forces. Photographs posted on social media showed rebels posing in front of government buildings in the town’s central square.

The capture of Jarabulus deprives the Islamic State of a crucial foothold on the Turkish border, used for funneling foreign fighters and supplies, and is expected to help accelerate the militants’ demise elsewhere across its self-proclaimed caliphate.

The offensive was spearheaded by Turkey, which sent tanks, troops and warplanes into Syria for the first time in the country’s five-year-old war to help a force of hundreds of Syrian rebels. The operation also includes U.S. advisers, who are advising the operation from inside Turkey, while American surveillance aircraft are providing overflight intelligence and are poised to contribute U.S. airstrikes if necessary, according to a senior Obama administration official.

The presence of Turkish troops in Syria will also add a new layer of complexity to the already massively complicated war, potentially pushing Turkey closer toward conflict with U.S.-backed Syrian Kurds and perhaps the Syrian government.

The offensive against Islamic State fighters in Jarabulus, along the Euphrates River, began just hours before Biden arrived on a mission to repair the eroding U.S.-Turkey relationship, which is considered crucial to the ongoing battle against the Islamic State.

“The major goal of the trip is to make sure that our alliance remains rock-solid and that relations get back on track,” said the senior official, who was traveling with Biden. “We can’t afford any friction in our relationship right now, because we have a lot of business to do with the Turks.” (WaPo)

So, has Turkey turned against IS? I’m not convinced. There have been no battles or casualties in the “Battle for Jarabulus.” All IS forces made an orderly redeployment to al-Bab prior to the Turkish-FSA invasion. This was all coordinated by Turkey to prevent further Kurdish advances in north Syria. I doubt Russia was surprised by this, but I have no idea of their part in this move. They only publicly expressed mild concern for these recent developments. Besides, the Russians have been busy tamping down the latest dust up between YPG and SAA forces in Hasakah.

U.S. Vice President Joe Biden is calling on Syrian Kurdish forces to move back across the Euphrates River, telling them they will lose U.S. support if they don't.

Speaking at a press conference in Ankara on Wednesday, Biden says Kurdish forces "must move back across the Euphrates River." He says "they cannot — will not — under any circumstance get American support if they do not keep that commitment."

Biden indirectly expressed support for the Turkish operation launched Wednesday to clear Islamic State militants from the town of Jarablus and deter Kurds from further expanding in northern Syria. (AP)

Once more we have stuck it to the Kurds. No one, including the Kurds, should be surprised by Biden’s remarks. I am sure the Obama Administration is desperate to prevent Turkey turning to Russia and away from the NATO and Borg hegemony. Obama cannot risk being labeled as the one who lost Turkey.

So far, I have not seen any indication that the YPG Kurds are withdrawing east of the Euphrates. I doubt the YPG is willing to abandon many of those newly liberated Kurdish villagers to the Turks. There are reports of YPG/SDF forces reinforcing their lines north of Manbij and digging trench lines to to meet the advancing Turks. We shall see what will happen in the coming hours.

I’d almost give my left nut to see the instructions sent by the CJTF in Baghdad to those Special Forces teams fighting along side the YPG/SDF for all these months. I am reminded of my team sergeant’s admonishment many years ago, “Well goddam sir. The first thing we do when we get off the goddam DZ is to put a goddam round through that goddam radio.”

This entry was posted in Borg Wars, Syria, TTG, Turkey. Bookmark the permalink.

92 Responses to “The World Turned Upside Down” – TTG