The “Zero Option” is the only realistic option 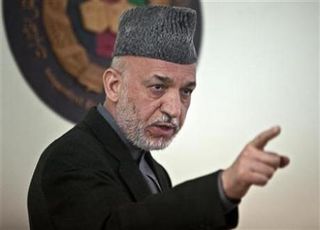 "Mr. Obama is committed to ending America’s military involvement in Afghanistan by the end of 2014, and Obama administration officials have been negotiating with Afghan officials about leaving a small “residual force” behind. But his relationship with Mr. Karzai has been slowly unraveling, and reached a new low after an effort last month by the United States to begin peace talks with the Taliban in Qatar.
Mr. Karzai promptly repudiated the talks and ended negotiations with the United States over the long-term security deal that is needed to keep American forces in Afghanistan after 2014."  NY Times

This is all nonsense.  Karzai continues to treat Obama with contempt.  He evidently sees POTUS as easily deceived, easy to manipulate and as someone who can be "plucked like a turkey."

Obama has begun to understand the depth of the disrespect to him and therefore to all Americans. This is a bitter thing when the extent of American sacrifice in life, limb and money is considered.

The truth is that Karzai (or any other Afghan likely to be in power) will seek to exploit the resources of the United States as long as possible while denying cooperation with ever greater frequency as the end of US presence approaches.

In the end the Afghans hold the "trump card" in this game in that they can simply refuse to grant legal extra-territoriality to US forces after 2014.

Obama should end this farce,  pl

15 Responses to The “Zero Option” is the only realistic option