Time to close the bag’s mouth at Aleppo City 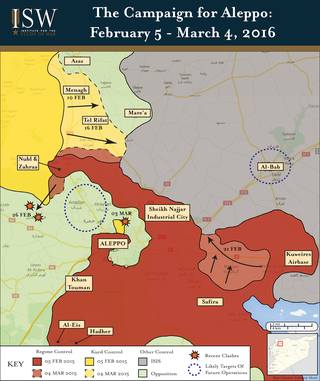 ISW produced this map.  SST thanks them.

Now that the government life-line road to Aleppo City is firmly re-established the time has come to pull the drawstring shut an complete the encirclement of the city itself.

The Gap between the Kurdish held area in the mouth of the Aleppo Gap and the government held  area in Sheikh Najjar Industrial City appears to be about 2 miles across relatively easy ground.  Given the way the R+6 forces and the Russian/Syrian air have been fighting this should be a very doable thing.

The Syrian government has no incentive to starve or bombard the Syrian civilians in the rebel held part of the city.  The amnesty offer and Russian brokering mechanisms in place for post encirclement surrenders of non jihadi fighters (unicorns) have worked well in other parts of the country.  Jihadis can be escorted out of the encirclement and into IS held country near Al Bab or into the mixed lot of rebels in Idlib Province where they can await their fate and final spiritual "victory."

The peace negotiations will be re-started soon at Geneva.  The R+6 should get this done before that occurs.  pl

This entry was posted in Current Affairs, Middle East, Syria, The Military Art. Bookmark the permalink.