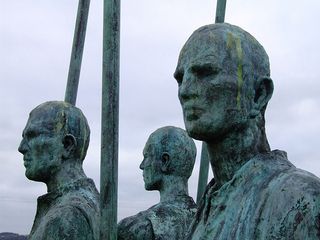 "James Madison, the father of our constitution, said that the the accumulation of executive, judicial and legislative powers into the hands of any faction is the very definition of tyranny. He then went on to assure the nation that the Constitution protected us from that fate. So, my question to you is: by allowing the executive to secretly follow a secret interpretation of the law under the supervision of a secret, nonadversarial court and occasional secret congressional hearings, how close are we coming to James Madison’s “very definition of tyranny”? I believe we are allowing our country to drift a lot closer than we should, and if we don’t take this opportunity to change course now, we will all live to regret it."

These words were spoken by Senator Ron Wyden at the Center for American Progress the day before Representative Justin Amash's amendment to block funding for NSA domestic surveillance programs was narrowly defeated on 23 July. The administration and the national security apparatus pulled out all stops in defeating the amendment. Yet, it was damned close. Representative Rush Holt wants to repeal the Patriot Act and the FISA Amendments Act with his "Surveillance State Repeal Act." If and when it comes to a vote, it'll be another close one. The legislative assault on the unrestrained surveillance apparatus will continue into the Fall.

The revelations about our government's mass electronic surveillance of its citizens continued to trickle out since that vote. The Xkeyscore program gives the NSA access to near all internet traffic, including that of U.S. citizens. All our emails to and from foreign lands are searched for "relevant selectors." Obama says,"No one is reading your emails." Bullshit! The DEA and probably other agencies are using NSA surveillance to build criminal cases and hiding the surveillance evidence from defendants, prosecutors and judges. Parallel construction is just a euphemism for criminal coverup. I bet we'll see more.

Yesterday President Obama made a concession to this pressure. He proposed an overhaul of surveillance policy, but made it clear that surveillance would continue. His proposals for reform are a move in the right direction. However, it is just a tactical defeat for the national security elite, a delaying action. He also said he would set up a task force to look at the issue and report back to him at the end of the year. That's usually a classic government tactic to deflect criticism and stall for time.

The pressure has to continue. It looks like Glenn Greenwald and the Guardian will continue to release documents in a steady enough stream to keep the issue in the public eye. Tech companies, except for the beltway bandits, don't like being openly identified as part of the surveillance state. It's bad for business. They will push for changes. The Oath Keepers are placing billboard ads in the Pentagon Metro Station and outside many military and intelligence installations reminding military members and government employees that they took an oath to support and defend the U.S. Constitution. They vow to up their efforts in the future. We can keep the pressure on our legislators through our letters and emails and on the tech companies through the choices we make. You know the national security nomenklatura and aparatchiki will pull out all stops to stem the loss of any of their powers. Yes, 'tis the risin' of the moon.

This entry was posted in government, Intelligence, Politics, TTG. Bookmark the permalink.