Trollhunter, a review by Alan Farrell 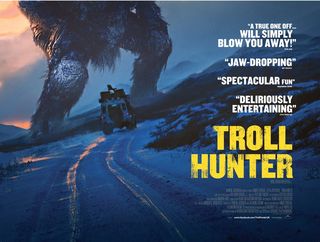 Directed by: Andre Ovredahl (also written by him, too, the which make him an auteur, concept requiring some transduction, I’m thinking, into Skandanavian ethos/culture, explicable perhaps by that “Andre” of obvious Mediterranean extraction coupled with the more manly and Norse “Ovredahl” (“oaf valley” in Norwegian… or Finnish …or Swedish… like there’s a difference). Starring: Otto Jespersen, Johanna Morck, Tomas Larsson, Erland Tosterud, Hans Hansen (no kidding), and Kristin Kristinstotter as the Little Mermaid. Subbed in English: from the original Norwegian… or Swedish …or Danish … like there’s a difference.

This little sleeper from 2011 follows in the wake of Blair Witch (might call it Blair Which), features hand held, shaky-frame photography, unappetizing “normal” people (ugh…them!), vaguely impelled by extra-normal curiosity toward the para-normal with abnormal vigor and supra-normal resilience. And they’re Swedes… or Norwegians …or Finns (like there’s a difference), socialized Nordics all of a late evincing a profoundly uncurious outlook upon the world where Stuff Happens. Well, anyhow… when it does, who you gonna call? Gonna call Johanna, Kalle, and Tomas, three film class students from the University and Uppsala (or sommeres in Finland… or Denmark… or Finland) determined to latch onto the spectral Hans (oddly, though Johanna plays Johanna, Hans does not play Hans nor Tomas Tomas), whose comings and goings in a beaten-up Land Rover (or perhaps Range Rover… like there’s a difference) sliced by cryptic slashes along the ribcage (the Rover, not Hans) just beg for exposure. Hans is after something, up to something. Johanna, Kalle, and Tomas aim to discover what.

Already, thigh, Hans establishes himself as a misanthropic loner, a creature of the night shadows (he sleeps in a seedy trailer (or caravan as we call them in Norseland) by day, prowls after dark, limps back, muddy and bedraggled at dawn to begin the cycle all over. We get a sort of travelogue through the byways of Skandanavia, a not unpleasant vista, though it’s all rain-splattered, mist befogged (or fog bemisted), crepuscular, lugubrious, dispiriting, the incomprehensible patter in Swedish (or Norwegian… or Finnish… like there’s a difference) punctuated, validated by the visible breath of the conversants, testimony to the icy doom hanging soundless over the proceedings. Up the fjords, over the kennings, through the aethelstans and glaciers and endless taiga toward the arctic circle, residence of the…

In one of the very clever moments of this little gem, at a souvenir shop, the camera lingers just a fraction of the second upon one of those cute little troll dolls used to be the rage, the ones with the big eyes and squat little bodies and wild (nylon) hair. Remember? Turns out Norway (or…) endures a plague of the things though they’ve long since erupted beyond cuteness, now growing up to three heads, as plumage according to the trollologist, to attract fee-males. We get a whole litany of trollosity: they live 1200 years; they’re born with one eye, later grow others, one head, later grow others; there are woodland and mountain trolls; they can be fifty feet tall or two hundred, or not; the cannot process vitamin D, hence the nocturnal lifestyle but somehow transmutate the D they do catch into calcium and that into boneage and then they explode but only after being irritable for a while first at which time the eat sheep or in a pinch Finns (or…); there are (don’t quote me on this nor borrow my spelling) Ringlefinches (mostly mellow), Rheimstossens (worse), Hardings (mildly annoying), and Tosselrads (rare) but the worst of the bunch, consigned to the far-up-north fastnesses, are the Jothnurs (these assemblages of guttural syllables, so I hear, are among the rare in Swedish not to have actual meaning, except here the formless dread of the unknown and unseen. And to keep the dread formless and unknown and unseen, the Government (sinister as only Nordic socialists can be sinister) has established the TSS (Trolliske Sikurhejt Dienst or Troll Security Service, to which Hans, turns out as former “Navy Ranger” whatever the hell that is, belongs). Hans has the mission of cataloguing and now and then of neutralizing with a sort of light-saber, photon-torpedo, taser thingie, trolls.

Hans warms up to the kids after a bit, confiding his mission and the darkest secret to them: Trolls hate Christians. No problem: None of them left in Finland (…or) as it emerges. Socialism, hey! Anyhow. They tag along despite the sinister (read: Government) intrusion of Hans’ boss, the Trollwarder. Adventures follow all the way norther and norther till we bump into the horrid Jothnur up under the tunder where they’re kept at bay by huge towers strung with high-tension electric lines (didn’t we try this in Jurassic Park?) in which there’s a—ooopsy daisy!—short.

The film is clever and deft and completely untoward with craftily-orchestrated moments of genuine shock, pleasant diversion set as it on a stage rarely glimpsed. The one weakness is the troll, sadly. Better it would have been to see only the devastation, only the shadow, hear only the roars and crashes and whangs and bangs, better far better than these manifestly Claymation thingamajigs. I suspect that a small-scale creation like this would not have access to heavy-duty computer gen stuff, but that would be the cleverness pushed to its limit: to see, in the tradition of the classic theater, the elbows of the action but not the hands, especially if the hands look like Harryhausen’s skeletons chasing after Sinbad.

This entry was posted in Farrell, Film. Bookmark the permalink.

10 Responses to Trollhunter, a review by Alan Farrell