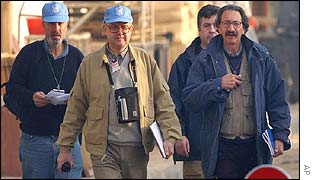 These were UN Inspectors in Iraq just before the US demanded they be withdrawn so that the US could attack.  they had reported at that point that they had the cooperation of the Iraqi government but could find no weapons or programs still in existence.  They asked for more time.  They were denied the time.

At present the US government, evidently repeating in great detail the "Wag the Dog" scenario that worked well for the Bush Administration is once again dismissing in advance any and all findings that  ight come from the present UN investigators who were in Syria.  pl