Why are Clapper and Alexander still in government? 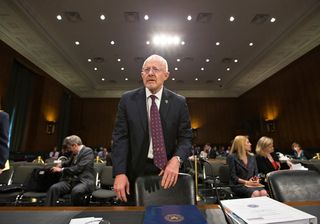 "Does President Obama understand why what people have learned, thanks to Edward Snowden, about the National Security Agency makes them angry? Maybe not. In a press conference on Friday, Obama said that his Administration would be “forming a high-level group of outside experts to review our entire intelligence and communications technologies …. So I am tasking this independent group to step back and review our capabilities—particularly our surveillance technologies.” One of the tasks of this “outside… independent group” would be to figure out “how we can make sure that there absolutely is no abuse in terms of how these surveillance technologies are used.”
Is lying to Congress and the public about surveillance programs considered an abuse? On Monday, the White House released a memorandum instructing James Clapper, the Director of National Intelligence whose false testimony in a Senate hearing about the programs was exposed by Snowden’s documents, “to establish” that very review group:
Within 60 days of its establishment, the Review Group will brief their interim findings to me through the Director of National Intelligence (DNI), and the Review Group will provide a final report and recommendations to me through the DNI no later than December 15, 2013.

The choice of Clapper came in for some instant mockery. The White House, as has been the case throughout the N.S.A. story, said that the problem was that people had misunderstood. Caitlin Hayden, a National Security Council spokeswoman, said in an e-mail that “the panel members are being selected by the White House, in consultation with the Intelligence Community,” not by Clapper alone, and that he wouldn’t be “directing” them or determining their conclusions. But, administratively, they needed a home, “and the D.N.I.’s office is the right place to provide that,” what with the need for security clearances and all. Bureaucratic tidiness is not what’s called for at the moment, though, especially at the expense of independence, given the depth of people’s doubts about the surveillance programs, and it is not what the President appeared to promise."  New Yorker

Clapper lied under oath to the senate about the NSA surveillance programs.  Keith Alexander seems to have lied to everyone at every possible opportunity.  Why are these very dispensible men still employed by the US Government.  Occam's Razor suggests that they are not displeasing to Obama.  The behavior of these two "slimies" reminds me of a retired army three star who told me that he could not be expected to tell the truth to Congress because he could not accept being responsible to both the president and Congress.  pl

18 Responses to Why are Clapper and Alexander still in government?