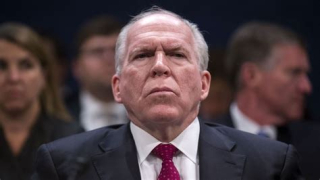 Well what do you know? John Brennan, the congenital liar and Obama's CIA Chief, actually made the right call when it came to the Steele Dossier. More importantly, we discover that Brennan inadvertently admitted that there was no substance to the Steele Dossier. If he had one shred of supporting evidence, you can be assured he would have been fully on board with the FBI request. But that is not what happened. According to a Senate Intelligence Committee report declassified this week, Brennan pushed back against the FBI's Jimmy Comey and Andy McCabe on the matter of whether to include the allegations reported in the Steele Dossier in the January 2017 Intelligence Community Assessment on Russian Interference in the U.S. Presidential Election. Chuck Ross reports that:

Documents declassified on Tuesday detail an intense debate between the CIA and FBI in late 2016 over the handling of information from Christopher Steele, with one CIA official telling the Senate Intelligence Committee that the former British spy’s allegations about Trump-Russia collusion were “very unvetted.”

Despite the CIA’s concerns about Steele’s allegations, the FBI successfully lobbied to include his information in an Intelligence Community Assessment (ICA) regarding Russian interference in the 2016 election. The bureau also continued using information from Steele to conduct surveillance against former Trump campaign aide Carter Page.

Investigators have since debunked several of Steele’s allegations.

The newly declassified information is from a Senate Intelligence Committee report released on April 21 that detailed the creation of an ICA released on Jan. 6, 2017.

I disputed the validity of Steele's work way back in January 2017, after BuzzFeed published the dossier. The errors and outlandish claims were so flagrant that even renowned Helen Keller, were she still alive, could see the problems. But I was wrong in believing that the media were capable of honest analysis or following simple logic. As a result, Steele's claims went virtually unchallenged by meme makers for more than two years and the American public was bombarded with the gargantuan lie that Russia's meddling in the 2016 Presidential Election paved the road for Donald Trump's victory. Democrats and media cretins  insisted that Trump is nothing more than Putin's prison bitch.

But cold, hard facts began to emerge that exposed the falsehoods of the Steele document. The biggest blow came courtesy of DOJ Inspector General Horowitz's revelation that the FBI had identified and interviewed Steele's Russian sub-source and learned that he could not corroborate any of the wild, scurrilous claims made by Steele.

Now we have learned the identify to that source–Igor Danchenko. He is a Russian-born analyst living in the United States and was the primary source for Christopher Steele. More importantly, he is directly linked to prominent Democrats closely tied to Hillary Clinton. In particular, Strobe Talbott:

According to information he put online, Danchenko attended high schools in the United States in the 1990s as part of a student exchange program. He graduated from Perm State University in Russia and received a master’s degree from the University of Louisville in 2005.

He worked for five years at the Brookings Institution as a Russia analyst. While there, he wrote a paper with Fiona Hill, who joined the Trump White House in 2017 as its top Russia expert.

Christopher Steele's veracity and judgment took another hit in early July when a British Judge ruled he was guilty of libel in his claim that Russia's Alfa bank was part of an elaborate money laundering scheme that enriched Donald Trump.

The latest revelation from the Senate Intelligence Committee makes it clear that l'affaire Steele was an FBI creation. I assumed previously that the CIA also was involved in helping feed and prop up the Steele Dossier. But the Senate Report makes it very clear that the CIA put no stock whatsoever in Steele's claims. Shocking as it may be, the congenital miscreant, John Brennan, actually did the right thing and resisted repeated efforts by the FBI leaders–Jim Comey and Andy McCabe–to insert Steele's findings into the Intelligence Community Assessment on Russia's meddling.

This really puts Jim Comey and Andy McCabe in the trick box. If the CIA had facilitated the Steele Dossier and corroborated its claims, then Comey and McCabe could argue that they were relying on intelligence community findings in their acceptance of the Steele Dossier. That cannot go that route. They are fully exposed.

Comey and McCabe committed a fraud on the Foreign Intelligence Surveillance Court by repeatedly submitting an application to spy on Carter Page that affirmed the allegations in the Steele Dossier as truthful. They knew by the end of January 2017 that Steele's claims were unfounded and not corroborated. But instead of fessing up to the FISC Judge, they opted to lie.

This is not to suggest that John Brennan and Jimmy Clapper, the former DNI Chief, are exonerated of illegal conduct. Au contraire. They oversaw a massive intelligence collection operation, which included covert actions designed to ensnare George Papadopoulos, Michael Flynn, Roger Stone and others and to promote the meme that Trump was a creature of Moscow.

One of the most important takeaways from this week's revelations is the tacit admission that the intelligence community did not have a damn piece of compromising information on Donald Trump. Consider this–we know that John Brennan had access to parts of the Steele dossier in August 2016 and he briefed Democrat Senator Harry Reid on its contents. And there is no doubt that the members of Brennan's Trump Task Force at the CIA was tasked to scour all intelligence for proof that would transform Steele's trash into pure gold. But that did not happen. Instead, come December 2016, even John Brennan had to concede that Christopher Steele's wild claims could nor be corroborated nor verified.

This entry was posted in Russiagate. Bookmark the permalink.