Hölderlin's Poem on The Course of Life (Lebenslauf) 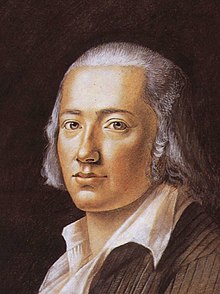 Note: Friedrich Hölderlin (1770~1843) has been called "the most German of Germans" by Norbert von Hellingraf. I consider him one of the three greatest European poets of the Romantic Age. This poem is written in the asclepiadic stanza meter developed by Asclepiades of Samos. During the 17th-century German poets began to use it and other Greek metrical forms by substituting stressed or unstressed syllables for quantitative syllables. Hölderlin was the great master of this rhythmical form and nearly all his poems use it. I have reproduced his asclepiadic meter in English.  The meter can, however, produce rather complex syntax to match the three meters in the stanza (lines 1~2, 3 and 4). Only Michael Hamburger translates Hölderlin's poetry with the correct meters (Friedrich Hölderlin Poems and Fragments, 2004).

Greater still you desired, but it is love that twists

us all earthward, and grief bends still more forcefully;

yet it turns without failure

our arc back to the starting point.

Whether upwards or down!—governs in holy night,

where mute nature reflects over the days to come,

yet a standard, still too a law?

This I learned. For not once, as mortal masters do,

did you heavenly ones, you who preserve the world,

whom I knew, with their foresight

led me over a level path.

Every man puts to the test, thus say the heavenly,

so he, strongly sustained, shall for all learned give thanks,

and now knowing his freedom

move to break out wherever he wants.