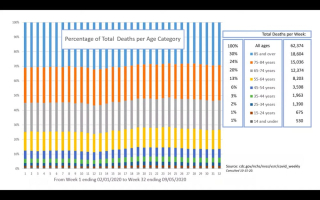 In an interview with The News-Letter, Briand addressed the question of whether COVID-19 deaths can be called misleading since the infection might have exacerbated and even led to deaths by other underlying diseases.

In other words, the effect of COVID-19 on deaths in the U.S. is considered problematic only when it increases the total number of deaths or the true death burden by a significant amount in addition to the expected deaths by other causes. Since the crude number of total deaths by all causes before and after COVID-19 has stayed the same, one can hardly say, in Briand’s view, that COVID-19 deaths are concerning."

The editorial board of this Johns Hopkins student journal retracted the article after they were confronted by faculty wokists and Covidians.  pl

This entry was posted in Health Care. Bookmark the permalink.

41 Responses to “A closer look at U.S. deaths due to COVID-19” retracted Johns Hopkins journal article