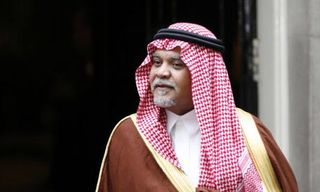 “From numerous interviews with doctors, Ghouta residents, rebel fighters and their families….many believe that certain rebels received chemical weapons via the Saudi intelligence chief, Prince Bandar bin Sultan, and were responsible for carrying out the (deadly) gas attack,” writes Gavlak. (back up version here).
Rebels told Gavlak that they were not properly trained on how to handle the chemical weapons or even told what they were. It appears as though the weapons were initially supposed to be given to the Al-Qaeda offshoot Jabhat al-Nusra."  infowars

Once something like Sarin that is colorless and odorless gets loose, the cloud drifts around killing people until it disperses.

Government artillery and rocket fire into these areas may have been a coincidence since there has been a lot of fighting there.

Bandar is the head of Saudi intelligence now.  Is the US going to bomb Saudi Arabia?  pl

This entry was posted in Saudi Arabia, Syria. Bookmark the permalink.

54 Responses to Rebels admit their role in gas disaster