Jubilo! The Siege is lifted – TTG

Posted on September 5, 2017 by Andrei Martyanov 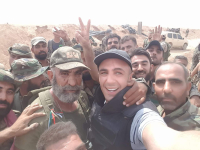 It's done. Elements of the 17th Reserve Division and the Tiger Force entered the 137th Brigade Base to be greeted by Issam Zahreddine himself. The linkup was effected in the early afternoon today after clearing a path through the minefields. The next order of business is to linkup with Zahreddine's men at the airport. The Tiger Force immediately moved its heavy artillery and MLRS close to this area to begin pounding the fortified IS positions in the Thardeh Mountains overlooking the airport. These positions were also targeted by Kalibr cruise missiles from the Admiral Essen.

Full coverage of the days events are at the Al Masdar News website including a few video clips of some very happy SAA troopers.

A few days ago I watched a video of the Tiger Forces approaching Deir Ezzor. To my surprise I saw a tricked out '73 Camino used as a technical. Son of a bitch, that's a sweet set of wheels. I hope that baby is fitted with some mean hydraulics and used as a command vehicle by al Hassan or Zahreddine. It, at least, must appear in the eventual victory parade in Damascus.

28 Responses to Jubilo! The Siege is lifted – TTG