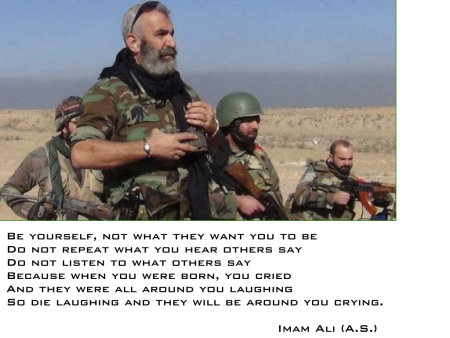 “BEIRUT, LEBANON (1:10 P.M.) – The prominent Syrian Arab Army (SAA) officer, Major General Issam Zahreddine, was killed today in Deir Ezzor after his convoy struck a land mine planted by the Islamic State (ISIS). According to a military source, General Zahreddine was conducting a special operation at Saqr Island in Deir Ezzor, when his vehicle struck the land mine.

General Zahreddine was the commander of the elite 104th Airborne Brigade of the Republican Guard that heroically fought off the Islamic State (ISIS) for several years, while under siege and under supplied.The General was born in rural Sweida village of Tarba and was 56 years old at the time of his death."

"The body of the late Major General Zahreddine has arrived in Damascus after being flown from the Deir Ezzor  as Governorate in eastern Syria. While full details about his funeral have not been released, it is believed that his body will be transported to his ancestral village of Tarba in the Al-Sweida Governorate.”  (Al Masdar News)

I have to admit that a tear came to my eye as I put this together. I developed a professional affection for that big bull of a Druze as I read about his exploits over the last few years. Rather than attempt a fitting eulogy, I chose to leave you with the words of Issam Zahreddine’s favorite saying of Imam Ali. It is said that Issam followed these words as his motto.

May his deep laughter be heard throughout all Syria and beyond as his beloved land is fully liberated and his vile enemies are crushed.