The Death of Cleopatra VII in Horace Ode I.37

Note: The first photo shows the head of Cleopatra VII in a Roman sculpture of the mid-first century BC about the time of her visit to Rome in 46~44BC. The second photo is an early first-century AD fresco from Pompeii that shows her red hair and ornaments.

She and Anthony were defeated at the Battle of Acticum (31BC) off the west coast of Greece and retreated to Alexandria. When Octavian defeated their land forces and entered Alexandria, they committed suicide, Cleopatra by poison (not a snake) and Anthony by a sword to his stomach.

Horace makes a subtle shift in the course of the ode from Roman triumph and Cleopatra's ignominious defeat to her glorious death. 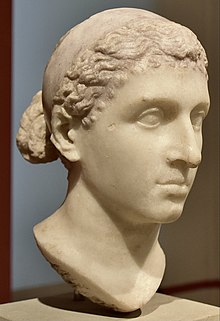 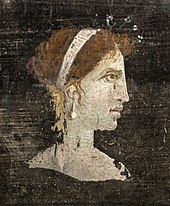 To drinking now, now all to the nimble foot
that beats the earth, now friends, now at last it’s time
to heap the festive couches deep with
Salian feasts for the gods’ enjoyment.

Before this day, to break out the Caecuban
from our ancestral cellars had been a crime,
while that demented queen was working
havoc to Capitol, death to Empire

with her polluted mob of retainers whom
disease alone made men-unrestrained in all
her impotence of fancied power and
drunk on sweet fortune. But seeing scarcely

a single ship come out of the flames intact
subdued her rage, and Caesar impelled a mind
distraught on Mareotic wine to
tangible terrors, pursuing closely

by oar her flight from Italy, even as
the hawk a gentle dove or the hunter, swift
in chase, a hare across the plains of
snow-mantled Thessaly, keen to put chains

around a monster laden with doom: one who,
intent to die more nobly, had nothing of
a woman’s fear before the sword nor
fled by swift fleet to a secret border,

audacious still to gaze on her humbled court
with tranquil face, and valiant enough to take
the scaly asps in hand, that she might
drink with her body their deadly venom,

ferocious all the more in her studied death;
she was indeed disdaining to let the fierce
Liburnian ships lead her dethroned, no
humble woman, to glorious triumph.

6 Responses to The Death of Cleopatra VII in Horace Ode I.37