Posted on December 20, 2013 by Andrei Martyanov 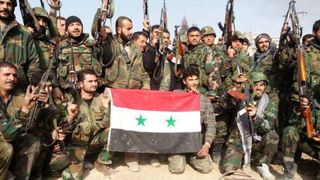 On 3 November, after the recapture of Safira by Syrian forces, I wrote that, “Things aren’t going too well for the Syrian rebels. Not only that, the Syrian army is evolving into something far more dangerous to its enemies than the conventional 60s era Soviet model army it once was. It is also gaining experience in joint operations with Hizbollah, the Quds Force and Iraqi Shia volunteers.” At that time I felt that victory for the Assad regime was all but a sure bet. Now Jeff White, writing for WINEP, comes to that conclusion as well, but with noticeably less certainty and enthusiasm than I.

I feel the primary reason for the Assad regime’s rosier prognosis is the transformation that has occurred in the Syrian armed forces over the last two years. The results of this transformation can be seen in a Press TV documentary on the Battle of Al Qusayr. Watch the video and pay attention to the narration. Yes, it’s a propaganda piece, but the information is there to see and hear. See how the Syrian army planned for the methodical encirclement and reduction of the rebel forces. They successfully penetrated the rebels communications system and determined their locations before seizing the key terrain piece that dominated the entire area. They quickly adjusted their plans to take advantage of developing situations. They made effective use of combined arms tactics and supporting fires. They conserved their forces for future operations. And they worked effectively with Hizbollah infantry and local militias. That’s coalition warfare. That's an adaptive, modern military force with effective combat leadership at all levels.

The only game changer mentioned by Jeff White that I feel could have brought the regime down was a direct, full blown R2P intervention by the US that would have destroyed Syrian air assets, command and control mechanisms and probably major combat forces. That kind of attack would not have gotten rid of Assad, but it would have made the transformation of the Syrian armed forces moot. In exchange for giving up his chemical weapons (more of a strategic deterrent force than a tactical asset), Assad conserved his developing forces and freedom of action. According to Rick Francona, who I knew for years at DIA, Syria may get previously contracted Yak-130 and MiG-29M2 aircraft from Russia in exchange for agreeing to give up the chemical weapons. This would provide a significant upgrade to Syrian air to ground capability to complement their developing ground forces. They are in it for the long haul.

A month ago I predicted that there will be much greater interoperability and trust between Hizbollah and Syrian forces along Israel's northern border in the future. I see Syrian forces, or at least a sizable portion of those forces, gaining the capability and the intent to defend Syria in a similar way that Hizbollah defends Lebanon. It won't be an offensive force capable of overrunning Israel, but it will make Israeli military action against Syria more difficult and costly. In effect, Israel will have a second Hizbollah on its border. Freeing the Golan Heights could become a rallying cry for this new force further complicating Israeli calculations.

32 Responses to TTG’s Analysis of the Syrian Civil War