What’s going on in Idlib? – TTG

“BEIRUT, LEBANON (12:30 P.M.) – The jihadist rebels of Jund Al-Aqsa (Al-Qaeda franchise) and Harakat Ahrar Al-Sham clashed again in the Idlib Governorate, marking the end of this brief period of peace. According to local rebel activists, Jund Al-Aqsa carried out a surprise attack in the Jabal Al-Zawiyah area of rural Idlib on Friday, targeting a Harakat Ahrar Al-Sham prison that was holding 13 of their members.

Jund Al-Aqsa's surprise attack on this prison paid off, as they managed to free 13 of their members while also seizing a large cache of weapons from Harakat Ahrar Al-Sham in the village of Qaminas. These two rebel factions are no strangers to infighting, as they both have engaged in their share of attacks against one another in both Idlib and Hama.” (Reported in Al Masdar News on 20 Jan)

U.S. manned and unmanned aircraft conducted a precision air strike Jan. 19 against an al-Qaida training camp in Idlib Province, Syria. More than 100 al-Qaida fighters were killed in the strike.

The Shaykh Sulayman Training Camp was operational since at least 2013. The removal of this training camp disrupts training operations and discourages hardline Islamist and Syrian opposition groups from joining or cooperating with al-Qaida on the battlefield.

U.S. strikes have killed more than 150 al-Qaida terrorists since Jan. 1. These strikes include the removal of Mohammad Habib Boussadoun al-Tunisi, an external operations leader, on Jan. 17; Abd al-Jalil al-Muslimi, a facilitator associated with a network plotting terror attacks in the west, on Jan. 12; and Abu Hasan al-Taftanaz, an al-Qaida senior leader, on Jan. 6. These strikes, conducted in quick succession, degrade al-Qaida's capabilities, weaken their resolve, and cause confusion in their ranks. (official DOD press release)

Seems the growing pool of jihadis around Idlib are suffering from the dual effects of “multi-culti” overcrowding of different groups in too small an area and the loss of their sugar daddies. That’s enough to make anybody testy. Good. Let the bastards soften themselves up with all this infighting before the R+6 must inevitably deal with them.

What’s happening in Idlib now brought to mind one of the scenarios Colonel Land and I bandied about when we were developing the last war game.

“On the heels of the liberation of Aleppo, the Russian 45th Detached Reconnaissance Brigade received orders to prepare for deployment to Syria. A few days before Christmas and augmented with Hizbullah commando units its teams were inserted by ground infiltration, airdrop and helicopter insertion to conduct reconnaissance of the area north of Idlib to include the Kafriya/al-Fou'ah pocket and the Taftanaz Military Airfield.

Within days of their arrival on target, these Spetznaz and Hibzullah teams began targeting jihadi leadership in surrounding towns along with ATGM launchers and ammo stores. These attacks simulated a pattern of inter-group fighting among the jihadis through targeted killings, raids and ambushes. The locations of AA launchers and missiles were provided through GRU cooperation/penetration of Turkish suppliers. After the murder of Ambassador Karlov, Erdogan has quietly slowed the resupply of the Idlib rebels/jihadis and has deftly hampered the efforts of NATO and the Gulfies to effectively reorganize the rebels. It seems the Russians can be quite persuasive and know the value of discreet diplomacy. They are also masters of maskirovka. Russian and Syrian media outlets play up the apparent disunity and in-fighting among the Idlib rebels and attribute the increasing assassinations and attacks to that in-fighting.”  (from an email between TTG and Turcopolier) 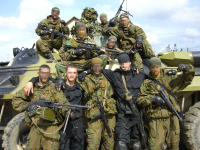 Developing this stuff was fun. It was so much fun, I went down to the cellar and dug my web gear out of my old rucksack. I fondled it and, just for a moment, wished to be a young man again. In this scenario, the boyos from the 45th were the invisible hand behind the growing jihadi distress and infighting among the Idlib jihadis. That’s probably not happening in Idlib today, but who knows. A man can dream, can’t he? I’m sure most of you heard about the nine IS jihadis who were rendered unconscious and killed by unknown assailants in the village of Hatleh outside Deir az-Zor on 19 Jan. In the nearby towns of al-Mayadeen and al-Ashareh,the locals stormed several IS centers and set them on fire. Whether this is a sign of popular uprisings against the jihadis or the result of some invisible hand gently nudging from behind, this is a damned good turn of events. DOL

71 Responses to What’s going on in Idlib? – TTG