I know the media mantra is that Brett Kavanaugh's accuser, Dr. Christine Blasey Ford, was "very credible." But those reaching or sharing that conclusion have not engaged a single brain cell in critical thinking. Sadly, the Republicans did a terrible job of exposing this fraud.

Let's go over the key parts of her testimony.

Now you need to understand the geography of Bethesda, Chevy Chase and Potomac in order to realize how ridiculous her testimony is. Here is the map produced (but not explained) by the Republicans: 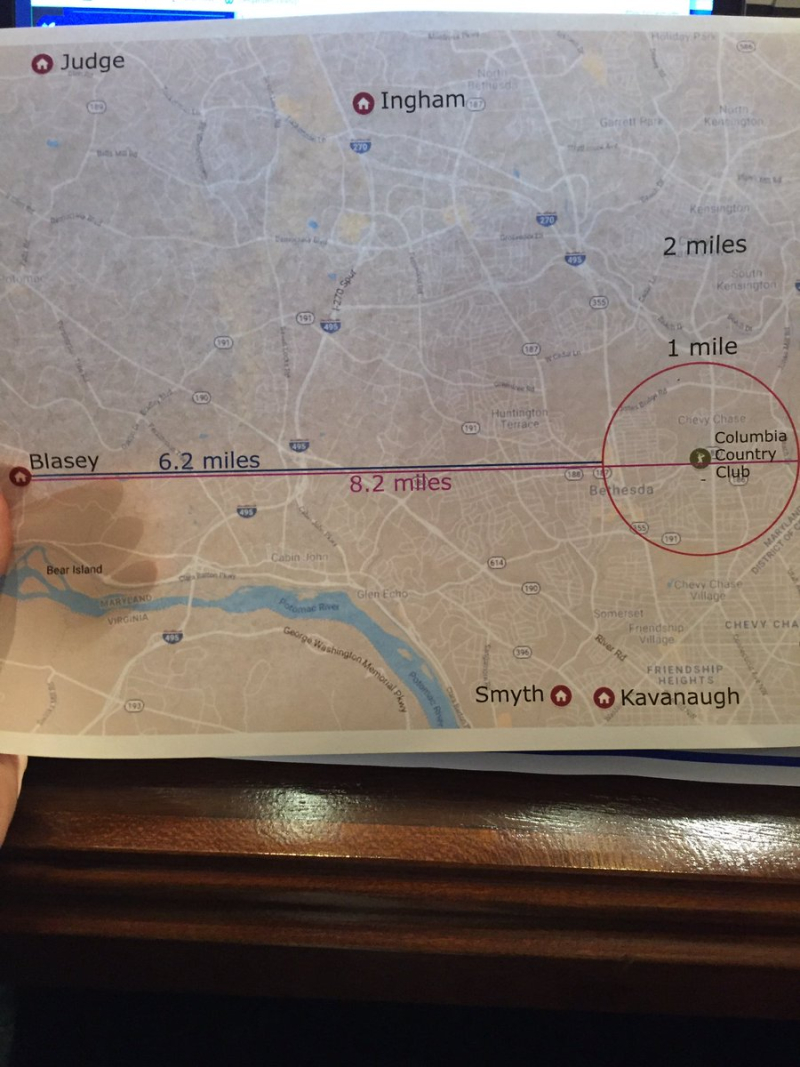 Now put on your common sense hat. It is a hot Saturday afternoon. You are hanging at the pool. She goes to a "small" party. Where did she go? She does not remember. What we know for certain is that none of the three  boys she identified being at the party did not live in Bethesda/Chevy Chase. Kavanaugh and Smith lived near the traffic circle at Western Avenue and Massachusetts Avenue, NW. That is almost four miles from the Columbia Country Club. Mark Judge lived quite aways outside the beltway (I-495) in an area between Potomac and Rockville. He was a good 12 miles away.

Who was the mystery fourth boy? She cannot remember. Maybe he lived near the Columbia Country Club.

The house was not the home of her friend Leland Ingham either. Ingham actually lives within a mile of Georgetown Prep.

None of the four people identified by Blasey Ford corroborate her account. None recall such a party. Most damning is the fact that Leland Ingham says she did not know Brett Kavanaugh. While she reported has told Blasey Ford that she believes Ford's account, she herself failed to provide any supporting testimony.

According to Blasey Ford, Kavanuagh and Judge were very intoxicated. Okay. How did they get to the mystery house? Did both drive drunk to the location? More importantly, Kavanaugh was not a member of Columbia Country Club. He was a member of Chevy Chase Country Club (which is about two miles south of Columbia). Although the two clubs are in the same general vicinity, the members of these clubs did not interact/socialize with one another. Those hanging at the Chevy Chase Club pool were not on the phone with those laying around the Columbia Club pool.

The Democrats are pinning their hopes on an FBI magic bullet. They will be disappointed. Here is what the FBI will do and discover:

At this point the Democrats will probably begin insisting that the FBI was under duress and did not conduct a proper investigation. They will call for a Special Prosecutor and independent investigator. This is not about discovering truth. This is all about thwarting Donald Trump.