Posted on September 15, 2013 by Andrei Martyanov 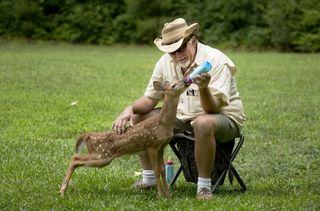 Photo taken by L. Todd Spencer of the Virginian-Pilot

Tomorrow the UN will release its report on the Ghouta gas attack and the next round of pressurizing debate will begin. In the meantime, I invite all members of this committee to enjoy the story of Bill Dixon. Bill is a Virginia gentleman, a waterman and a hunter. His story is what many would consider a fluff piece. I think it is the story of a man with a sophisticated awareness of the world around him who has found contentment in that world.

I first read this story about six weeks ago in my local paper.  I was enjoying a cup of tea while feeding my scurry of squirrels and murder of crows from my deck. It brought a smile to my face. Enjoy the story and accompanying video of the Virginia deer whisperer.

12 Responses to A Virginia Gentleman – TTG